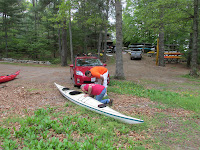 To paraphrase just a bit ...there is nothing-absolutely nothing-half so much worth doing as acquiring a new boat.
Yesterday, Mrs. Trashpaddler and I journeyed down to a kayak village of sorts on the Billington Sea named appropriately enough Billington Sea Kayak.  The reason for our journey was a race against the aging process.  You see, much like its owner, my boat (which has served me well these past thirteen years) is beginning to show its age.  Compounding the aging process is the fact that the boat's builder has ceased making the model I paddle leaving only two of this model up for adoption at Billington's.  After thinking long and hard about possibly switching to another type of boat, I decided to stick with the model that fits me like a glove and has never let me down.  Once sales associate Brett and I had duly recorded the serial number (photo above) and completed the transaction, the number available dropped to one.

The boat in question is a Surge kayak designed and built by Kerry King at his shop on Westport Island, Maine.

While visiting Billington's I was shown a unique three-section sea kayak made entirely from duct tape and pvc tubing... 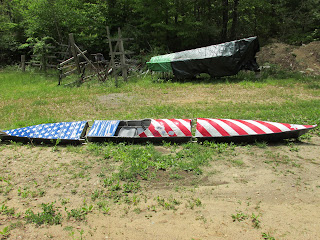 The kayak was built in 2012 for the Duct Tape Kayak Project which uses the boat to raise money for charity.  This year all funds raised will go to the Heroes on the Water program... 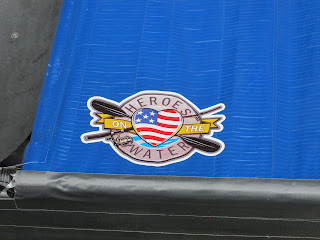 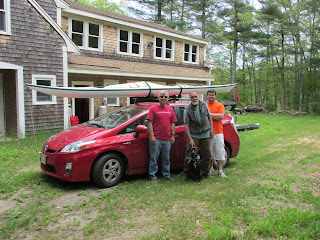 It's going to be awfully tough placing the first piece of trash inside my new ship's hold.

Congrats on the new boat! Though, as you say, adding trash to it will be tough.

Well now that you have a new boat, I'll have to come and see it. Enjoy

Thanks PenobscotPaddles. Will I see you rowing in that gig at this year's Blackburn? ;)

Erik, Hope you're able to get up this way. Thanks to recent rains we have some decent water levels again.