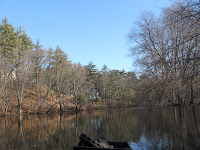 It's not very often that I would elect to launch my boat at daybreak on a January morning.  However, Old Man Winter was offering a very brief window of opportunity before commencement of his next onslaught.  Temperatures had stayed near 40 degrees overnight and would rise to 50 with a gaining wind throughout the day.  Thanks to my early start, I made it down the Concord River to Sawmill Brook where Buttricks Hill was found looking very unwinterlike (at left), before the winds began gusting.  I was reminded of that old Irish toast "May the river rise to meet your paddle, and the wind be ever at your back".

On the way downriver I'd passed the ever vigilant Minuteman (statue) ... 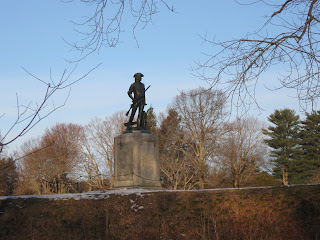 standing ready near the Old North Bridge in Concord, Massachusetts.

On my trip back upriver I ran into traffic gridlock in the form of Canada geese... 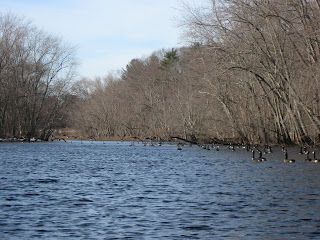 This time it was me doing the honking to get a clear passing lane.

By the time I reached Egg Rock the wind was really starting to howl, so I decided to check the veracity of Nathaniel Hawthorne's claim about the lower Assabet River in Mosses from an Old Manse: "...It is sheltered from the breeze by woods and a hillside; so that elsewhere there might be a hurricane, and here scarcely a ripple across the shaded water."  At the Assabet's Leaning Hemlocks I found Hawthorne's statement to be true... 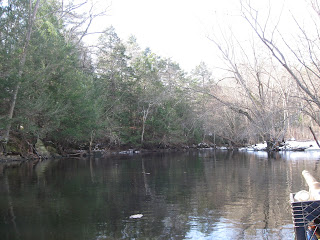 At my takeout the day's modest trash haul posed in the sun... 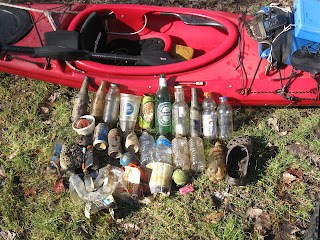 There were 18 recyclable containers (5 redeemable) and 24 pieces of miscellaneous rubbish such as plastic bags, nip bottles, tennis balls, a hypodermic needle, and someone's left shoe.  YTD = 203

In yesterday's Boston Globe an article by Andy Metzer mentioned how a coalition of beverage/food industry folks are hoping to eliminate the bottle deposit program (Bottle Bill) in Massachusetts.  Apparently, they're emboldened by their recent success (with help from our state's legislative leadership) in, once again, preventing the 'Bottle Bill' from being expanded to include non-carbonated beverages.  According to Metzer's article this group is working with State Senator Michael Moore of Millbury to replace the present 5 cent per bottle redemption program with a 1 cent per bottle (4-liters or less) fee paid to the state by the bottlers/distributers.  This fee would be used to fund recycling initiatives.
As I understand it from the article those that support eliminating the 'Bottle Bill' believe that most communities now provide curbside recycling programs and thus there is no need for folks to be bringing empty and possibly dirty containers back to food stores for redemption.  They also mention that "pay as you throw" programs (where there's a charge for items not recycled) would further encourage recycling.  I wouldn't disagree with either of these positions.
However, what they don't address is the issue of litter generated by folks purchasing beverage containers for use away from their homes while 'on the go'.  These are the containers that are littering our streets, sidewalks, streams, rivers, bike paths, and public parks.  Our present Bottle Bill, despite being a slight inconvenience, does a great job of reducing litter of carbonated beverage containers.  It would do an even better job if expanded to include non-carbonated beverages.

If only there was a way to differentiate the containers purchased for use in the home from those purchased for use 'on the go'.  One thought that came to mind this morning was to have a 5 (or better yet 10) cent deposit affixed to single serve containers sold from refrigerated cabinets, and no deposit on containers sold from stores when kept unrefrigerated.  Something tells me that this idea, while sounding complicated, might just work in helping to solve the growing litter problem in Massachusetts...especially in these times where there's an app for this and an app for that.
At any rate, that's what I woke up thinking about this morning.
﻿
Posted by Al at 6:32 PM

Until deposits kick in on all of the above- We can each get Points of Litter for every piece, every empty beverage container, be it bottle, can, cup...