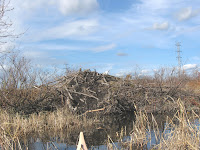 My calls for an encore were heard...summer returned and provided one beautiful day that will be savored for a while.  Of course, I am very fortunate to be able to get an early start on my workday and occasionally finish up by mid-morning.  Today, that allowed me to be out in my boat on the Sudbury River before 11 am.  Did I say it was warm?  Real warm!
After passing under Route 20 and the old Central Mass railroad trestle, I stopped to admire the very well built beaver lodge, seen at left.  The beaver that built this lodge is a master builder as evidenced by the very water tight dam he'd constructed nearby.
I paddled upriver enjoying the occasional refreshing breeze out of the southwest.    Past Wayland H.S. the river's current became noticeably stronger.  Pushing past Indian Point and the Heard Pond outlet, I soon found my upriver passage blocked by a blowdown.  I'll have to remember my hand-saw for the next trip.   After turning about and heading back downriver, I stopped in a shady, shallow stretch with a nice rocky bottom where, after some transloading, a little snack break was enjoyed.  Once back onboard I resumed my return trip and almost immediately came upon an automobile tire standing upright on the riverbank.  It looked like a big doughnut sitting up there so I decided to pull it down and secure it to my aft topdeck.
Several times today I saw a hawk with a pronounced white rump between tail and wings.  I kept trying to get a better look but wasn't able to.  Then, a little upstream of the Sandy Burr Country Club, I saw this guy perched in a tree... 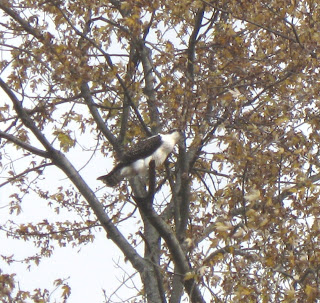 His call confirmed his identity as an osprey, but he was not the hawk I'd been seeing.  After the osprey took flight... 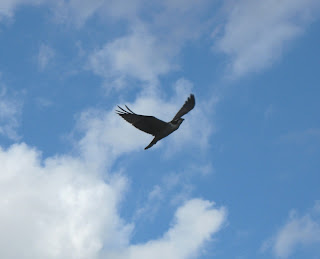 I saw the other bird in the distance.  Later, downstream of Route 20, I would get a good look at the hawk with my binoculars and believe it was a northern harrier or marsh hawk.  It flew low over the marsh area and its underside was a copperish color indicating it may be an immature harrier.  Just a short while after that I found myself back at River Road and unloaded my day's catch... 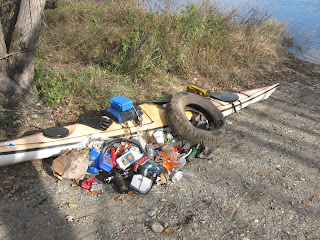 The total was 93 pieces of trash.  Of these 46 were recyclable (15 redeemable) and 47 were miscellaneous rubbish such as plastic bags, styrofoam cups/bait tubs, 6 lead weights used in fishing, cardboard packaging, the auto tire, etc.  Fully 35 pieces were found alongside River Road, the most egregious being a bag left by someone who'd changed his oil and installed a set of new plugs and wires.  This person put all the used stuff in a plastic bag and left it alongside the river.  How thoughtful!     My YTD total stands at 5561.
Amazingly, no other boats were seen on this section of the river today.  A father and son were fishing from the shore at the River Road launch site.

After posting about my trip to the Dead River back in September, Chris Gill commented and recommended the book Arundel by Kenneth Roberts. I just finished it and found it to be a great read. I had not been aware that such a tough and long mission had been undertaken that first autumn after the outbreak of the Revolutionary War.  Roberts wrote the book in 1930 and crafted quite an interesting story around the first-hand accounts of participants.  His understanding of, and portrayal of the Abenaki involvement was most interesting to me.  It reminded me of how well John Fennimore Cooper understood the Native Americans that lived in his area.  The book also shows how great a man Benedict Arnold was before he changed sides.
If anyone is looking for a good book to read this winter, this could be it.

Speaking of winter and the approaching year's end, have you given any thought to what kind of calendar will grace your wall next year?  I've recently put together my "Trashpaddling 2011" calendar and you can check it out by going to this link.
Posted by Al at 7:51 PM