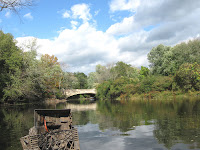 The same heavy rains that made yesterday's drive to work on Rt. 128 such a tortuous affair, today, allowed my boat and I to stay afloat on the Assabet River between Egg Rock and Nashoba Brook.  It has been several months since I could do so on this stretch of river.
The weather kept struggling to improve during the course of my trash patrol.  The photo at left was taken on the return trip downriver as I approached the Rt. 2 overpass.  Finally some big patches of blue sky!
Trash started off good and stayed that way the whole trip.
Up past the reformatory, the wandering dumpster was seen on the shore, waiting for a fair tide.  When the river rises a little higher it may be floated downriver a few thousand feet to a point where it can make a dignified landfall and, once again, stand on its own four wheels... 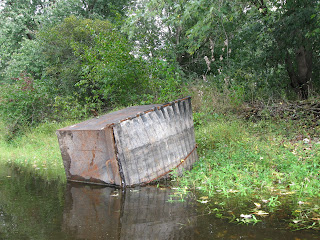 Wildlife seen today were several blue herons, numerous Moscovy ducks, a large hawk (not a red-tail). painted turtles, and a small snake that swam under my boat's bow as it crossed the river.
Once back at the Lowell Rd. launch site, the day's catch posed in the afternoon sunshine... 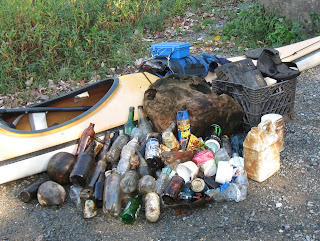 The total trash count for the day was 101.  There were 51 recyclable containers (14 redeemable) and 50 pieces of miscellaneous rubbish such as plastic bags, bait tubs, fishing paraphernalia, an old milk crate, what looks like the back of a small television set, and a large block of styrofoam floatation.  YTD total stands at 5157.
Posted by Al at 7:17 PM