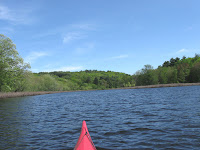 Sure was a nice day to be out on the river!  After launching at the Lincoln Canoe Launch near Rt.117, I trash patrolled downriver to Concord's South Bridge and then retraced my paddle dips.  The photo at left was taken on the return trip as I approached Fairhaven Hill.
A little further upriver, this Great Blue Heron appeared both graceful and majestic in flight... 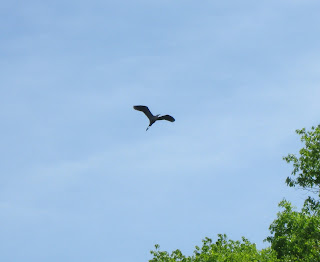 Other wildlife seen today were red-winged blackbirds, tree swallows, musquashes, turtles, mallards, and Canada geese.  Also saw several good sized fish rise above the water's surface for insects.
Today's trash haul was a modest 24 pieces that included large chunks of flotation (styrofoam), plastic bags, aluminum and plastic containers, and a Carson Irrigation Control box cover.  The box cover may have come from Nashawtuc Country Club which is just a little further upriver.  I'll hold on to it for a while in case someone wants it.
The breakdown: 6 recyclables (2 redeemable) and 18 miscellaneous rubbish.  YTD total stands at 2104. 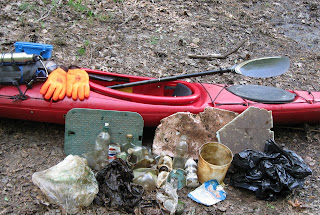 As much as I admire the vocabulary and content description. I love the photography more. Imagine controlling water craft & catching birds in flight. Bravo Zulu!