Essex River - Essex to Ipswich Bay and Back 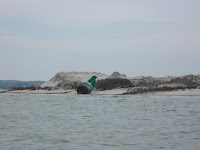 Yesterday felt like mid-summer and the kind of day where being on salty water seemed somehow more appropriate.  That combined with my daughter having mentioned wanting to paddle the area behind Crane Beach resulted in two kayakers traveling to the little town of Essex.
We launched at the Town Landing near the intersection of Routes 22 and 133 and began following the river's circuitous route to the open sea.  The tide would be incoming for most of our trip and the tidal current was most noticeable in the narrow passage between Cross Island and Conomo Point.
As we crossed Essex Bay towards the southwest tip of Castle Neck, we began to feel the cooling effect of a southerly breeze coming across the water.  Having decided to paddle up to Crane Beach allowed us to pass by the green bell-buoy "1" pictured at left (Note: Picture can be enlarged twice by clicking on it).  It looked as though one of last winter's storms had thrown it onto the beach like a piece of driftwood.  Usually it is located about a half-mile out into Ipswich Bay and rides the waves in a vertical position.
This photo was taken in the same proximity and behind my daughter's boat, Cape Ann can be seen in the distance... 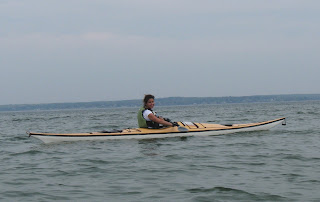 On the return trip across Essex Bay we took in this nice view of Hog Island... 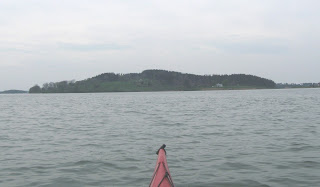 The facing slope of the island served as the outdoor set for the movie The Crucible.  A replica of a 17th century Puritan village was built for the film about a little witch-hunting between friends and neighbors!  Those Puritans sure were a bunch of "funseekers", eh?
Much of the route we paddled will be packed with small human-powered boats during the upcoming Essex River Race on May 15th.  Yesterday, however, boat traffic was fairly light.  As we approached the town, we were treated to paddling alongside the two-masted schooner, Maine.  With its red sails aloft it looked quite elegant in the narrow river's confines.  The Maine can be seen by visiting the web site of H. A. Burnham shipbuilding.
Trash was sparse and consisted of only one beer can, one styrofoam coffee cup, and one plastic bag... 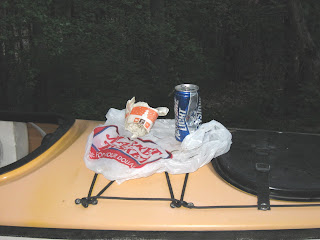 Before leaving town, we enjoyed tasting some locally harvested seafood.
Didn't listen to music on this trip, but Tom Rush's Rockport Sunday would have worked just fine for me!
Posted by Al at 5:19 PM