New Weapon in the War Against Aquatic Trash 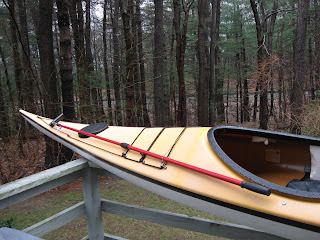 It's called the "Come Hither" and was fabricated on this rainy afternoon. No longer will bottles and cans, knowing they are just beyond the outstretched reach of my kayak paddle, be able to taunt me. With this tool, originally designed for cleaning windows, I'll be able to hook them from the shrubbery and bring them alongside for eventual boarding.
Speaking of the war against aquatic trash, did you know that the state of Michigan has a 10-cent deposit on soda and beer containers? Their redemption rate is 97%.
We here in Massachusetts, still holding on to the outdated 5-cent deposit, have only a 70% redemption rate. I wonder if the fact that the State receives all unclaimed deposits has anything to do with keeping the deposit at 5-cents. Some reports show the state of Massachusetts receiving 11 million dollars annually from unclaimed deposits. It could be called a "lazy tax".  We're too lazy to stop paying it and the state's too lazy to stop accepting it.  It's time to be a dime!
Posted by Al at 3:59 PM

Reminds me of that claw on a stick Mom had for reaching things - do you remember it? Had a trigger grip on one end and a claw on the other. You've taken it a step further - make your own gadget :)

Lis, I remember it and would bet that hundreds of errant bottles and cans just shuddered at the mention of it. From that device there would be no escape!