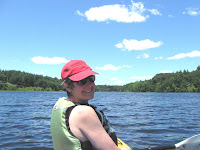 Today's trash patrol of the Sudbury River found Mrs. Trashpaddler perched in the bow fulfilling the role of first mate! Great skill was displayed in using her paddle blade to lift objects from the water. She may be a 'natural'.
We rented a double kayak (sometimes referred to as a "divorce boat") and paddled upriver against a still steady current more typical of springtime. Trash was spotty, at best, with most of it found in the Heath's Bridge area. Fairly good sized bottle of brandy floating amidst the lily pads.
Numerous Canada geese, blue herons, tree swallows, and eastern kingbirds were seen along the way. One red-tailed hawk was seen as well.
Arriving at Fairhaven Bay we landed on Brooke Island and came upon this cluster of ghostly 'Indian Pipe'... 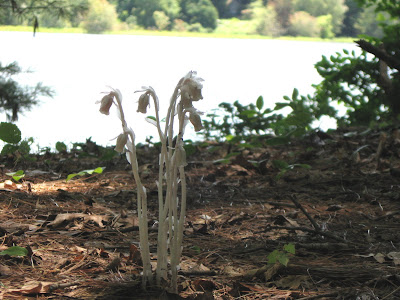 The trip back downriver was into a very refreshing breeze. Conditions could only be described as idyllic and numerous folks were taking in the river from canoes and kayaks. At Heath's Bridge there were several people fishing. Some were fishing from atop the bridge, perhaps unaware of an old town ordinance forbidding it.
Arriving back at our takeout location, our trash count for the day was a modest 10... 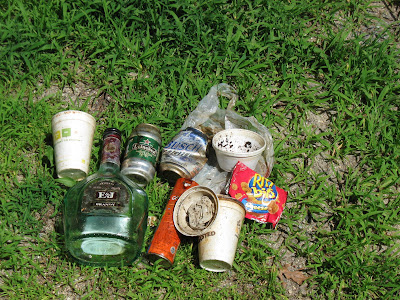 Of these 3 were recyclable (2 redeemable) and 7 were misc. rubbish. YTD total stands at 2700. Blackburn Challenge in only 3 days time.
Posted by Al at 3:26 PM

Rather small take for a craft with a bow look-out.
Was she afeared of a Town ordinance prohibiting interference with the local's stash spots?

Good luck on the Blackburn! Hope you have great weather and an awesome time.

Bless you Al for all your hard work cleaning up the rivers!

I kayak the Sudbury a few times a year (working my way north from Framingham a little at a time) and appreciate your efforts. I try to do my part and pick up floating bottles or cans when I see them but you're a one-man wonder!

I was actually looking for some info on the river and your blog popped up on Google. Look forward to hearing more about your experiences.

P.S. My general Framingham blog is at framhamster.blogspot.com.

Thanks Brett, As you are working north on the river, I'm getting set to go further south upstream of the Saxonville Dam. An acquaintance reported seeing a river otter in that stretch recently.
Perhaps we'll run into each other on the water someday.
Checked out your blog on life in the 'Ham' and enjoyed it. I spend my early mornings working in the 'Ham'. Regards, Al