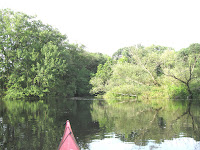 I was up before the sun this morning and after launching into the Sudbury River, I paddled down to Egg Rock in time to see it rising above the Lowell Road bridge. With a dozen pieces of trash from the lower Sudbury already on my deck, I began my backlit ascent of the Assabet River. Due to, yet another, 2" plus rain event the river was chugging and just barely staying within its banks. Dodge Rock was nowhere to be seen and Willow Island was awash. Trash was plentiful and quite a few pieces were riding the mid-stream current requiring only a quick grab as they drifted by. By Spencer Brook a second dozen had been added and by Route 2 a third. The worst offender of the day was a 1-quart plastic container half full of used motor oil.
Wildlife was represented by great blue herons, Canada geese, and a few ducks.
Only one other boater was encountered on the Assabet, another early bird kayaker.
At the mouth of Nashoba Brook, I turned around and began my swift ride downstream. With the river so much bigger than usual, the Route 2 bridge looked relatively small... 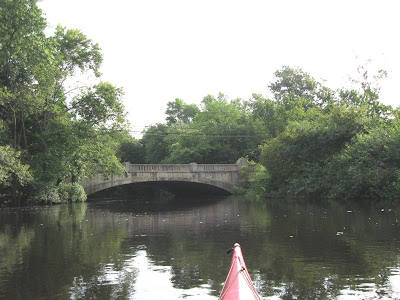 Arriving back at Egg Rock and heading upriver on the Sudbury, it was interesting to note that the Sudbury's current was only half as strong as the Assabet's.
By 9:30 am, I was back at my takeout location with 56 pieces of trash. Of these, 30 were recyclable (7 redeemable) and 26 were misc. rubbish such as plastic bags and styrofoam. The group posed in the sun before hopping into my car's trunk... 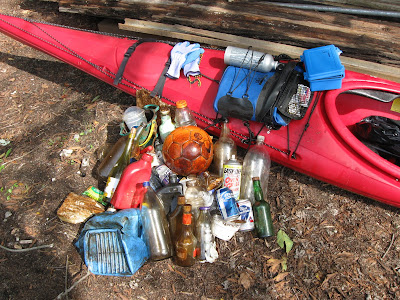 Thinking of you today at Salisbury Beach - lots of kayakers on the water viewing a couple of tall ships there. At Old Orchard Beach Saturday - finally got some nice beach weather.