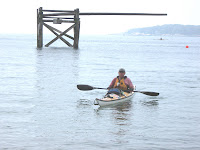 Sitting in my kayak near the railroad drawbridge over the Annisquam River yesterday morning I prepared myself for the task at hand. It’s fairly simple and straightforward: plant one of the blades of my paddle into the water and pull with one arm while pushing with the other, do same with opposite blade and then repeat again and again, until I have travelled the approximately 20 miles between this spot and Gloucester Harbor’s ‘Greasy Pole’. At that point, having circumnavigated Cape Ann, I can stop paddling and make landfall on a beach where a cold draft and hot barbeque meal will await my arrival.
Could I have those things without paddling the 20 miles? Sure, I could. Would they taste as good? I doubt it. And besides, I wouldn’t have the satisfaction of demonstrating that I still possess the mettle required to meet the Cape Ann Rowing Club’s annual Blackburn Challenge.
Now, I don’t know how seriously old Howard Blackburn would take any of this. After all, he rowed a heavy fishing dory approximately 60 miles in the mid-winter of 1883 and his very survival depended on his being successful. In the process he lost most of his fingers and toes to frostbite. Certainly, our paddling or rowing 20 miles in mid-summer pales by comparison, but perhaps Howard would cut us some slack for helping to keep alive the story of his epic ordeal.
I first took the Blackburn Challenge in 1991 when 40 years old and it has become an annual rite of passage for me. Each year I look forward to asking myself the question and finding out the answer. More than 200 others will also be taking the challenge and, judging by the familiar names listed year after year, I suspect many have also adopted this event as their own annual ritual. With so many of us heading to the same destination in a wide variety of human-powered boats, at times, it will feel like we’re part of some modern-day ‘Spanish Armada’! Many will reach the beach before me and many after, but that really doesn’t matter. So long as I can make it under my own power, I can return home safe with the knowledge that, for at least one more year, “I still got it!” Despite the fact that I often have difficulty standing up after tying my shoes and sometimes wonder if I’ll be able to get socks onto my feet, I can still circumnavigate Cape Ann!
Then it was time for my class of boats to approach the starting line and begin the journey. On my deck were 4 pieces of trash freshly plucked from the waters of the Annisquam River: a beer bottle, plastic water bottle, styrofoam coffee cup, and a plastic bag complete with smiley face. This fairly typical group would accompany me all the way to the finish. The first order of business was paddling the Annisquam up to the Lighthouse at Wigwam Point. No sooner had we left the confines of the river, than we entered the realm of fog. Most of Lanesville and Rockport were never seen. Near Halibut Point, a shiny black head surfaced about 10 yards in front of me. The head slowly turned, revealing the whiskered face of a small harbor seal that upon seeing my rapidly oncoming bow, signaled “dive”, “dive”, “dive” and quickly disappeared beneath the surface. At Andrews Point, we needed to use the charts (with compass headings) provided by event organizers to make the 2-mile crossing of Sandy Bay to Straitsmouth Island and the halfway check-in point. Enveloped in the fog it was easy to imagine having been transported back in time, when looking to starboard, I saw two men pulling hard on the oars of a banks dory such as Howard Blackburn rowed in 1883. After passing between Emerson Point and Milk Island the fog began to lift allowing views of Good Harbor Beach and Atlantic Road. Just a little past the 3-hour point I finally got to see Eastern Point Lighthouse. Beyond that was the little light at the end of the Dog Bar Breakwater and the final turn into Gloucester Harbor. The last 2 miles is a straight shot with a great view of the city of Gloucester and its still busy harbor. Passing Tenpound Island, the Greasy Pole comes into view followed by the sound of live music. Then a small thud as my bow hits the sandy beach and, at last, the incredible tastiness of a draft beer and barbeque dinner!

Congratulations to the organizers of this year's Blackburn Challenge on their excellent job!
Also congrats to Adirondack Pirate Pete on completing his first trip around Cape Ann! Nice job Pete!
In case you’re wondering, the Greasy Pole is used during St. Peter’s Fiesta. Click here to see how.
Posted by Al at 8:26 AM

Somehow your comments regarding socks & shoes go me to wondering if Woodman's, in Essex, still offers Fried Lobster & Black beer to FORMER Athletes.
Kudos to you! Whatcha gonna do when grown up?