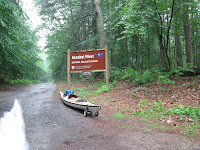 When I launched my kayak onto the Assabet River late this morning, little did I know that I wouldn't be returning to Ice House Landing by water. The weather forecast I heard before going to work mentioned thunderstorms staying to the west of Worcester. So, in a cool drizzle I began paddling upriver with hopes of making it to Gleasondale.
At the White Pond Road bridge, I encountered a small powerboat with two U.S. Fish & Wildlife employees and just upstream from the bridge, a very vocal and recently fledged hawk was letting his parents know that he was hungry. He stayed fairly close to the large nest where he'd been born in a tall white pine tree.
Trash was very light with only a few empty beer cans and a red pillow. After passing under Sudbury Road in Stow, I heard a far-off rumble of thunder and just before reaching the outlet from Lake Boon, a second rumble convinced me that turning back would be prudent. Though I was making pretty good time going downriver, the thunderstorm was moving even faster and, near the small private airfield in Stow, a flash of lightning signaled that it was time to get off the water pronto! Once ashore, I waited 35 minutes for the storm to pass, but it didn't seem to be going anywhere. Fortunately, I had used my portage wheels when getting my boat to the launch site earlier and had stowed them below deck.
It was equally fortunate that the Assabet River Rail Trail runs parallel to the river, so the last mile or so to Ice House Landing was completed by towing my boat along the dirt roadbed. At the White Pond Road bridge, I stopped near the entrance to the Assabet River National Wildlife Refuge. This large area of land used to be known as Ordway and was a government ordnance (ammunition) depot.
My trash count for the day was 9 from the river and 3 from the rail trail. Of these, 9 were recyclable (5 redeemable) and 3 were misc. rubbish. Here they are resting up on the royal pillow... 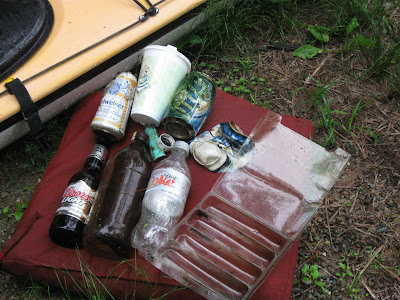 Darned good thing you had those wheels on board! This weather is getting really frustrating!

Global Worming on the way!
Must read of the year 1816 once again.