Seek Ye Not Redemption in Massachusetts? 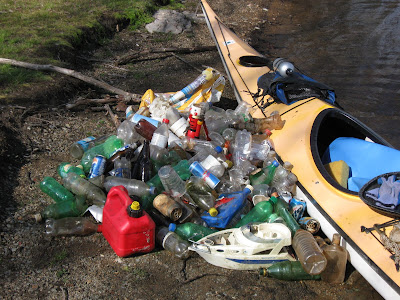 As I look at the composition of recently recovered flotsam it is apparent that the majority of beverage containers purchased nowadays are not redeemable and therefore have no monetary value in the Commonwealth of Massachusetts. The lucky few that are redeemable have a value so low that a large number of them go unredeemed, and our Commonwealth seems to benefit from that. Remember, the Commonwealth gets all those unredeemed nickels and it adds up to millions of dollars every year. It's possible the Commonwealth prefers that the deposit remain low and thus discourages redemption. If so, would this constitute a conflict of interest? Could such a thing happen here in Massachusetts?
Our Governor, Deval Patrick, has proposed, as part of his 2010 budget, a modification to the Bottle Bill that would apply the exceedingly humble 0.05 cent deposit to many of the beverage 'du jour' containers not presently included, and this will help things a little. It could help a lot, however, if the deposit was a dime, but that is probably asking too much. In fact, by the time the budget gets approved by the legislature his Bottle Bill modification may no longer be included. Such is the way things occur in our fair state. We musn't be hasty!
However, there is one thing the Commonwealth does fairly quickly and that is to develop new 'Scratch Tickets'. You name the theme and they have a 'Scratch Ticket' for sale. So while we're awaiting an updated 'Bottle Bill', how about developing an "Trashpicker's Dream" scratch ticket? This ticket would not be for sale and only be available at authorized 'Redemption Centers'. It would be given to those who bring in 100 non-deposit but recyclable containers. The ticket would be funded from the Clean Environment Fund which is, in turn, funded with the unredeemed deposits the Commonwealth receives. Think of all the litter that might disappear from the landscape at the hands of potential millionaires!
Posted by Al at 10:38 AM

Why am I remembering the story of Fruit Flies in a bottle? Our problem is not related to money. Rather to behavior of the ignorant thumb suckers.

I think the ignorance factor will always be there. That's where the old adage "One man's trash is another man's treasure" can become part of the solution. It's just that the old nickel isn't quite the treasure it was back in 1983.
I used to collect fireflies in a bottle when I was a kid. Never tried collecting fruitflies though.

My reference to thumb suckers was a lack of education in deportment
It once was a form of education and thought necessary to be taught.

What about banning some of the water bottle containers outright? I think this is happening in California. (20 years ago "spring water" in small plastic bottles did not really exist and we got by fine without it.)

Anonymous said:
What about banning some of the water bottle containers outright? I think this is happening in California. (20 years ago "spring water" in small plastic bottles did not really exist and we got by fine without it.)

I think California is probably on the right track. On another blog, CleanUpTheRiver.com, I saw these plastic containers referred to as "manufactured trash". I agree.
My drinking water, from the tap, is contained in a reusable stainless steel bottle and I immediately noticed an improvement in taste. Such bottles are readily available and cost between $15 and $25. As long as their reasonably cared for, they'll last forever.