This morning I trash patrolled the Sudbury River from Rt. 62 to Lee's Bridge and back. Skies were cloudy and winds were light when I launched a little before 8am. Prior to passing under Rt. 2, I noticed some trash between the two wildlife underpasses. Upon getting closer and seeing considerable trash on shore, it became apparent that a brief shore raid would be in order. Shortly thereafter my dry bag was full as well as my ship's hold astern and 7 aluminum baking pans adorned the deck behind my cockpit. This one raid netted about 50 pieces of trash. I took this photo of the area later when the sun was out.... 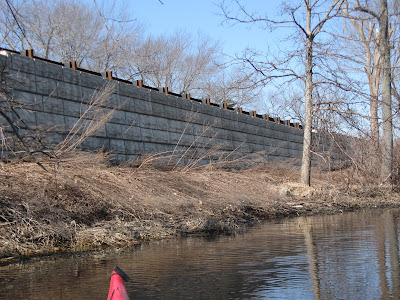 Proceeding upriver I began seeing wood ducks, mallards, and red-winged blackbirds. About a half mile upriver from Clamshell Bank, I recovered a single empty bottle of Pilsner Urquell a beer made in Plzen, Czech Republic. When this bottle was placed next to a can of Foster's lager, my deck began to take on an international look.
Just after Heath's Bridge, I saw my first great blue heron of the season. As I entered Fairhaven Bay I noted a large bird flying to the north. Its wingspan was nearly that of a blue heron. I wondered if it might be one of the eagles I saw last week. Looking with my binoculars, I could not confirm its identity. Once in the bay, another large bird was perched in a tree in the same area from which the previous bird came. I got a fairly good look at this bird but could not be sure if it was an immature eagle or perhaps an osprey. It did not have the white mask near the eyes that the osprey has and when it took flight it spiralled on the updrafts similar to a hawk. If it was a hawk it was much larger than any of the hawks I have previously seen and definitely was not a red-tailed.
Turning back upriver I approached something white near the north end of Brooke Island. Upon getting closer I found it was a dead northern pike. The shore behind the dead fish had a recently made hole and no sooner had I noticed the hole than a beaver came swimming out of it. Seeing me he dove under the surface and shot through the water about 10 feet from my boat. He then surfaced and tail-slapped several times. Thinking that there might be beaver kits in the area, I decided to move away and headed along the shore of the island. This shoreline was only recently released from the winter's ice and it yielded 2 plastic bags and a beer can.
Between the bay and Lee's Bridge I encountered a fisherman heading to the bay in a motorboat. His was the only other boat I would see all morning.
At Lee's Bridge I turned around and headed downriver as the sun began to break through the clouds. At the same time the wind began to pickup out of the northwest.
Below Heath's Bridge I encountered my first tree swallows of the season. They must have waited for the sun to come out as I had not seen them earlier on the trip upriver.
Reaching my takeout location, my trash count for the day was 65 pieces of trash. Of these 48 were recyclable and 16 were both recyclable and redeemable. YTD total 382 Here they are "fresh off the boat"... 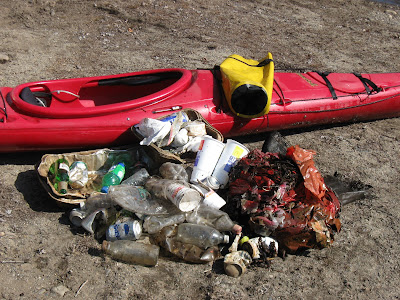 This day's trash patrol was in honor of Mr. Peanut, a Toy Fox Terrier who had been a loyal companion to my Dad for the past 10 years. May he rest in peace.
Posted by Al at 3:31 PM

Hi Al - when did Mr. Peanut pass away? I hope Dad will get another dog - they're such great companions.

Mr. Peanut was a very unusual dog. Although young, he subdued his passions and devoted what comfort possible to an elderly woman was possible. He took on a 97 year old man who just needed the warmth of his body and provided that warmth for three years. He then devoted his time, energy, and love to the old coot who made all things possible.
A wonderful companion, Indeed!