Decided to trash patrol a different stretch of the Assabet River this afternoon. I launched at the Ice House Landing which is just upstream of the Ben Smith Dam in Maynard. Once on the water, I headed upriver and into a fairly stiff breeze out of the southwest. Trash was light at first but began to pick up steadily. Wood ducks and mallards were present in good numbers. Also saw a few red-winged blackbirds, a mute swan, the first belted kingfisher of the season, a red-tailed hawk, and one common merganser. Evidence of beavers was everywhere including some fairly large diameter tree cuts. Passed 3 beaver lodges and one musquash lodge
The last half mile before reaching the Sudbury Rd. bridge in Stow had the most trash. It made this stretch seem like the 'longest half mile' due to there being bottles and cans almost every 50 feet. Turned around after the bridge and the wind gave me a big assist on the way downriver. The highlight of the patrol was coming upon a mated pair of wood ducks performing their head-jutting mating ritual in the middle of the river. The wind brought me quietly towards them while my binoculars allowed me to witness their performance.
I enjoyed paddling this stretch of the Assabet River and was a bit surprised to have it all to myself on such a warm day in March.
Reached my takeout location with 71 pieces of trash of which 62 were recyclable. This is today's haul laid out on my deck (forgot to bring camera in boat)... 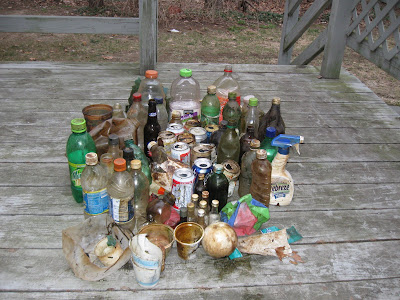 What exactly is a musquash?

Lis, Musquash is the Native American name for Muskrat. I prefer their word over ours.