This afternoon I celebrated the return of open water by trash patrolling the lower Assabet River. At high noon, under bright sunny skies and with air temperatures in the mid-thirties, I slid my kayak off of the shore ice and into the lower Sudbury River, just a little ways from Egg Rock. At the confluence of the Sudbury and Assabet, I turned left and began paddling upstream on the Assabet. Shortly after passing the leaning hemlocks, I came upon a pair of common mergansers and a red-tailed hawk. Further along many mallards and Canada geese were on the water.
Approaching the Leaning Hemlocks: 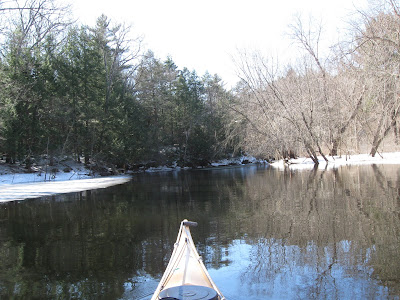 Willow Island was wearing a thick layer of ice left by the recently lowered water level. The mouth of Spencer Brook was open water and nicely sheltered from the breeze: 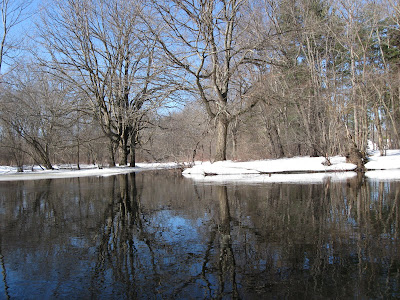 The ice has retreated all the way to the riverbank in most places and it is evident that 'Old Man Winter' has released us from the month long siege he'd so firmly held us in. The numerous robins and several bluebirds I saw today confirmed for me that the darkest hours are behind us. I've heard many recent reports of red-winged blackbirds showing up and if true, it would bolster the case that spring is in the offing.
Trash recovery started out slow today but after passing through Concord Junction my deck was getting a little crowded. Paddling under the new Pine Street bridge was much easier now that the river's flow isn't forced to divide between two narrow portals. At a sandbar behind the Thoreau School I beached my vessel and stowed some of the trashload below deck. Once that work was done I enjoyed a cup of hot cocoa while sitting in the afternoon sunshine.
Pine Street Bridge: 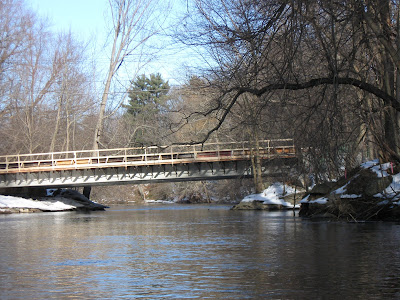 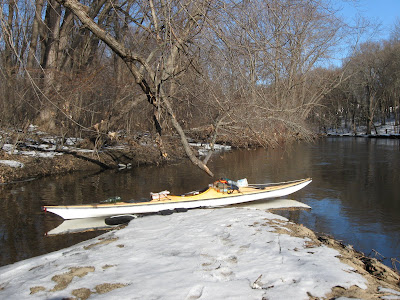 The trip downriver was smooth and fast and before I knew it I was swinging around the tongue of ice that still projects out from Egg Rock, and heading up the Sudbury River to my takeout location. My trash count for the day was 40 empty containers of which 19 were recyclable. My YTD total is 47.
Today's Bounty: 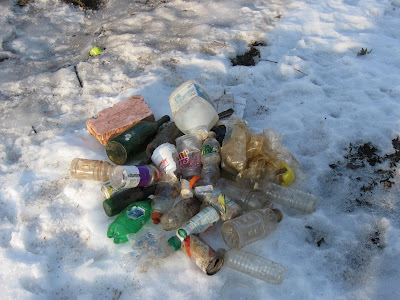