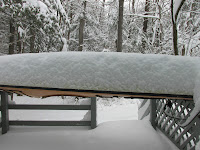 My boat was only taking a brief respite on my deck when our spring suffered a major setback!
Awaking to a bigger snow event than expected yesterday morning, I headed out early for my pre-dawn commute to work on Cape Ann.  It was a strange journey that included seeing the headlights of several vehicles pointing to places where no vehicle is meant to go.  It left me to wonder why some folks just cannot bring themselves to slowdown a bit.

After finally arriving on Cape Ann, I found a storm of a whole other nature: wild, wind-driven snow, and an ocean that had reclaimed quite a bit of terra firma.  The wind-chopped salt water was lapping at the pavement on the causeway in Essex.  After crossing it, I briefly lost my momentum while refueling, and received a helpful and much appreciated push from a Town of Essex policeman to get moving again.
Heading into Gloucester on Rt. 133 found the Annisquam River up and over its banks.
While I had my camera with me, I didn't get any photos for lack of plowed-out places to park, and very poor visibility in "white-out" conditions.
My mid-morning drive home on the upper reaches of Rt. 128 could best be described using the words of another motorist: "Felt like I was driving through Franconia Notch".
Once safely home, I measured 11.5" of white stuff on my boat's upturned hull.
As Old Man Winter exited to the east (probably laughing like hell) he left this colorful sunset in his wake... 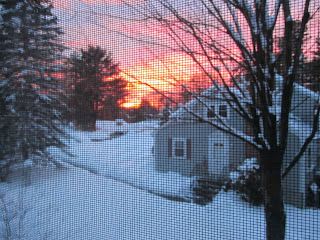 The resulting snow melt, if combined with any significant rainfall, may well exceed what our already swollen rivers are capable of handling.﻿
Posted by Al at 9:23 AM

Al, no disrepect for the dangerous weather conditions you encountered, however I must admit I chuckled at your descriptions. Guess thats part of us New Englanders- always looking to make the best of things we encounter.
Oh, and sorry, but I have only a little sympathy for your snow covered and temporarily shelved kayak as my snowshoes are gathering dust here in the Champlain Valley while it snows all around us-nearly a flake here.
Maybe we could do a temp. swap, kayak for snowshoes, or better yet, about a foot of snow for sunny spring like days with baren ground and water!
As always, enjoy your adventures and journeys, thx for taking us along.
Bernie
http://www.litterwithastorytotell.blogspot.com/

Hi Bernie, I just heard the weatherman on NECN saying how Burlington, VT saw temperatures in the 50's this afternoon compared to our mid-forties down here. I guess it does seem that things are a sort of upside down.
I'll gladly make the swap you mention!

Al, just received a cancellation of a planned snowshoe outing on Saturday. Here is some of the text,
"...I am now seeing that it will be beyond muddy, into the totally impassible muddy stage. I am thinking of moving this outing up to February next year as for the last 2 years we have been "muddied out."