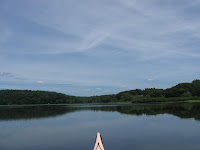 As I launched into the Sudbury River at the Lincoln Canoe Launch this afternoon, I was thinking about a message I'd received yesterday from Gordon, an Aussie (Rubbish) Paddler.  Gordon informed me that Trash Paddlers in his country are called "Rubbish Paddlers" as that word is used the way we use "trash".
He's lobbying for floating waste traps and for the implementation of a Container Deposit Scheme. He sent along a slide show outlining his goals.  Unfortunately, I can't figure out how to post it here.
One area he recently "rubbish" patrolled was Breakfast Creek in Brisbane. His rubbish hauls look very familar to what we see around here.  Quite a few PET containers.  Same problem, different hemisphere!

At any rate, it was a pleasant afternoon to be out on the river and I never get tired of entering Fairhaven Bay (photo above).
Heading downriver I was joined briefly by this tightly formed squadron of ducks... 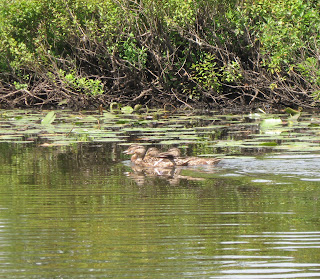 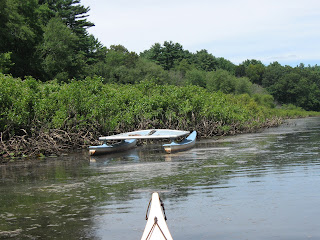 Passengers on this pontoon boat were being returned from an excursion to Fairhaven Bay... 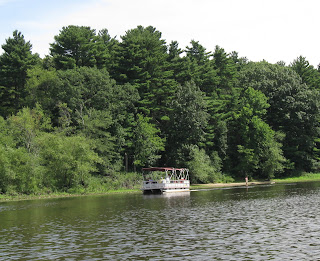 Most of today's haul was recovered from the river's shore at the Sudbury Road bridge (Heath's Bridge) in Concord and had been left there by folks fishing. 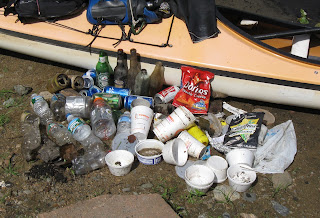 There were 22 recyclable containers (9 redeemable) and 33 pieces of miscellaneous rubbish that included quite a few styrofoam bait tubs.  YTD = 4641
﻿
Posted by Al at 8:44 PM