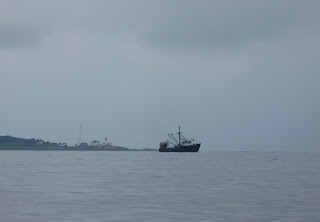 This past Saturday night I was happy to stumble upon Turner Classic Movies' showing of the 1937 movie Captains Courageous on the 75th anniversary of its release.  The movie is based on Rudyard Kipling's book of the same name published in 1897, and uses the Grand Banks fishery, in its age-of-sail heydey, as its backdrop.  Most of the story takes place on the Gloucester-based fishing vessel We're Here.  Spencer Tracy won an academy award for his portrayal of Portuguese crew member Manuel Fidello.
I'm wondering if the movie was sort of the "Deadliest Catch" of its day, giving folks a rare glimpse of a world most would never see or experience.
After the movie was thoroughly enjoyed, Mrs. Trashpaddler produced a book she had given me in 1996 entitled Kipling in Gloucester, The Writing of Captains Courageous by David C. McAveeney published in 1996.  In McAveeney's book I learned that Kipling chose the title of the book from one of his favorite poems, Mary Ambree:


When captains courageous, whom death could not daunt,
Did march to the siege of the city of Gaunt,
They muster'd their soldiers by two and by three,
And the foremost in battle was Mary Ambree.

and also this: "Kipling, referring to Captains Courageous and Conland (his friend and source for many of the fishing details in the book), in his autobiography said, "Yet the book was not all reportage.  I wanted to see if I could catch and hold something of a beautiful localized American atmosphere that was already beginning to fade.  Thanks to Conland I came near to this."

I think most would agree Kipling accomplished this and more.

Subsequently, I was reminded of Kipling's famous and timeless poem:

"If"
If you can keep your head when all about you
Are losing theirs and blaming it on you;
If you can trust yourself when all men doubt you,
But make allowance for their doubting too;
If you can wait and not be tired by waiting,
Or, being lied about, don't deal in lies,
Or, being hated, don't give way to hating,
And yet don't look too good, nor talk too wise;

If you can dream-and not make dreams your master;
If you can think-and not make thoughts your aim;
If you can meet with triumph and disaster
And treat those two imposters just the same;
If you can bear to hear the truth you've spoken
Twisted by knaves to make a trap for fools,
Or watch the things you gave your life to broken,
And stoop and build'em up with wornout tools;
If you can make one heap of all your winnings
And risk it on one turn of pitch-and-toss,
And lose, and start again at your beginnings
And never breathe a word about your loss;
If you can force your heart and nerve and sinew
To serve your turn long after they are gone,
And so hold on when there is nothing in you
Except the Will which says to them: "Hold on";

If you can talk with crowds and keep your virtue,
Or walk with kings-nor lose the common touch;
If neither foes nor loving friends can hurt you;
If all men count with you, but none too much;
If you can fill the unforgiving minute
With sixty seconds' worth of distance run-
Yours is the Earth and everything that's in it,
And-which is more-you'll be a Man, my son!﻿
Posted by Al at 7:59 PM

Fascinating, I didn't know the origin of the title. Also the photos of your Gloucester trip were great! What a variety of houses!