2012 Run of the Charles - Dedham to Brighton 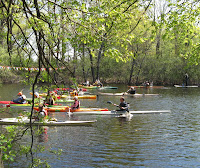 The thing I was most proud of after completing this year's Run of the Charles was still having a hat on my head at the finish line.  On the stretch of river between Riverdale Park in Dedham and Moody Street in Waltham paddlers faced some very blustery headwinds.  Fortunately, those same unfriendly winds later became a welcome tailwind for the last 3 miles to Artesani Park in Brighton.

This was the 30th edition of the Run of the Charles Canoe and Kayak Race. The event, hosted by the Charles River Watershed Association, celebrates the restoration of the river to the point where it can be utilized for many types of recreation.

Above is a photo of the recreational class, in which I paddled, waiting at the start line.

Of course, while paddling in this event, I found myself wondering about the river's name.  Is it "Charles River" or "River Charles" and what might the Native Americans have called it?  Recently, I came across Captain John Smith's The Description of New England  written in 1616 and based on his earlier voyage in 1614.  He opens with this entreat to his patron:


"TO THE HIGH HOPEFVL CHARLES,
Prince of Great Britaine.
Sir:

O fauourable was your most renowned and memorable Brother, Prince Henry, to all generous designes; that in my discouery of Virginia, I presumed to call two namelesse Headlands after my Soueraignes heires, Cape Henry, and Cape Charles.  Since then, it beeing my chance to range some other parts of America, whereof I heere present your Highness the description in a Map; my humble sute is, you would please to change their Barbarous names, for such English, as Posterity may say, Prince Charles was their Godfather...."

The map he mentions shows the the river as "The River Charles".

Later in his Description of New England he provides the following:

"BECAUSE THE BOOKE WAS PRINTED ERE
the Prince his Highnesse had altered the names, I intreate the Reader, peruse this schedule; which will plainely shew him the correspondence of the old names to the new"

In the mentioned schedule Smith provides the old name and new name for 30 locations.  For the river many paddled today he provides the new name as "Charles River" and the old name as "Massachusets River".  I'm kind of partial to the old name, even if it is "barbarous".  After all, the river does lead to the homeland of the Massachusetts tribe.  Also, how can a river be named for a guy who never even saw it?

When not thinking about such weighty matters, I did manage to scoop up a few pieces of floating trash "on the fly", so to speak.  They posed (out of the breeze) with this year's ROTC tee-shirt filling in for my still resting boat... 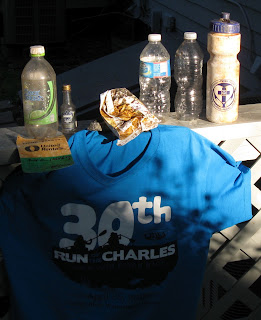