Yesterday's Visit to the Willimantic River 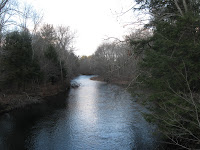 Following a New Year's Day paddle on Lake George in New York, I headed towards the Willimantic River in northeastern Connecticut.  An overnight respite was taken in a motel near the shores of the Housatonic River in Lee, MA before resuming my journey east towards a rising sun on New Year's Day Plus One. Once on the east side of the mighty Connecticut River, I followed a very scenic Route 190 towards Stafford Springs.  Along the way, I passed the burned out remains of a church that had caught fire New Year's night in Somers, CT.  There were many people gathered, sadly, observing the still smoldering remains of their church, in the morning's early light.
After reaching Stafford Springs, I headed south to the appointed rendezvous near Rt. 74.
This Willimantic trip was put together by Erik (Open Water, Moving Water) and included some folks from Rhode Island Canoe/Kayak Association.  Erik and Tommy were paddling canoes while the rest of us were kayakers.
A great resource on the Willimantic River is the Willimantic River Alliance Web site.
From visiting their site I learned that "Wilimentuck" was a Native American word believed to have meant "land of swift moving waters" and that describes, exactly, the beautiful river we spent several hours upon yesterday.
One near constant companion on our journey was the New England Central Railroad (formerly the Central Vermont RR).  Its tracks were almost always on the riverbank or passing overhead as they did here... 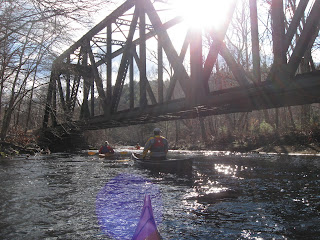 A quick glance at the NECR Web site shows its mainline running from tidewater at New London, CT through the heart of New England all the way to the tippety-top of Lake Champlain at East Alburg, VT.  Trains traversing this route pass through many great river towns such as Willimantic,  Palmer, Millers Falls, Brattleboro, Bellows Falls, White River Junction, and Winooski just to name a few.
Aside from a northbound freight which passed through while were starting our vehicle shuttle, the tracks remained quiet during our visit.
Speaking of vehicle shuttles, this was the second time in three days that I've experienced the concept of a one-way paddle.  It's a nice alternative to my usual 'up and down' river outings.
Having started our downriver trip at Plains Rd., we enjoyed very pleasant conditions for our 8-mile passage... Especially considering that it's early January in New England!

The Willimantic runs swift, shallow, and clean.  Trash was a rarity, but nonetheless, we did manage to roundup this bunch of miscreants before arriving at the Merrow Rd. takeout... 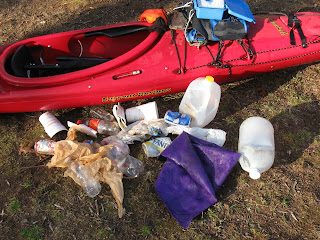 There were 9 recyclable containers (4 redeemable) and 9 pieces of miscellaneous rubbish such as plastic bags, styrofoam items, and a deflated plastic ball.

Thanks to Erik for making this trip happen and introducing some of us to a new river in early 2012!
Posted by Al at 11:47 AM

Great paddling with you Al. Thanks for showing us down the Assabet.

hey there trash paddler, thanks for posting your reflections on the paddle down the willimantic, a personal favorite of mine, I'm quite familiar with a number of the rivers in this area. if you're looking for a good trashy one, the Natchaug river! a mile or two before it meets the willimantic river is amok with junk. I have plans to do a trash pick up there, if you're around in may, come along. Thanks again!

A Novel, Joining with you for a trash patrol on the Natchaug in May sounds interesting. You can contact me at the address listed on my blog under my logo. I'll try your contact address.