Mrs. Trashpaddler and I were fortunate enough to get in some biking this morning on the Bruce Freeman Rail Trail in Chelmsford.  We covered the section from the Westford/Carlisle trailhead to Chelmsford Center and noticed several improvements since our last visit.  Unfortunately, I left my camera at home and wasn't able to get photos.  Therefore, I'll describe them:
This trail keeps getting better!

Very little trash was seen today and what there was was mostly found in clusters at 2 locations.  The total was 19 recyclable containers.  They stopped in my backyard for a respite on their way to the recycle bin... 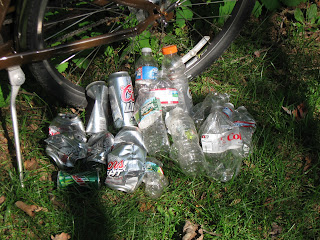 I explained to the plastic contingent how our Massachusetts legislators can't update our bottle bill because they are too busy debating (salivating) how they will soon get their hands on state run gambling casinos and slot machines.  Imagine the nerve of State Senator Jamie Eldridge (from my town of Acton) in proposing a moratorium on legislators working for gambling interests in the first five years following their exit from public service.  After the resulting brouhaha, legislators whittled his proposed moratorium down to 1 year.
This sounds like a disasterous gamble to me.  The federal government granted gaming rights to Native Americans for a good reason.  We owe it to them.  The Pequots, with their Foxwoods Casino have shown how well Native Americans can run such an operation and the state of Connecticut has received a healthy percentage of the take.
Massachusetts should allow the Wampanoag people to build and operate a casino similar to Foxwoods and Mohegan Sun.  Keep the legislators out of it as they have shown repeatedly that integrity is not their strong suit.  Massachusetts will still get a fair share of the take and prevent even more scandals by not being in the casino business.  Kudos to Mr. Eldridge for anticipating a potential fiasco.