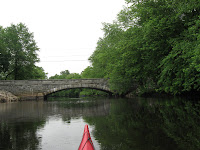 Trash patrolled the bottom mile of the Assabet and Sudbury Rivers this morning in misty conditions at the start and, later, in what the Irish might call a "soft rain".  It was both quiet and peaceful on the water today.
Wildlife seen were Canada geese and wood ducks with little ones, several Muscovy ducks, a lone musquash, and squawking blue herons engaged in territorial disputes with one another.
Trash found today was the usual mix of plastic, styrofoam, and beverage containers.  Some stuff was new, but most had been in the river for a while.
Here's the gang enjoying a break on a sandy beach... 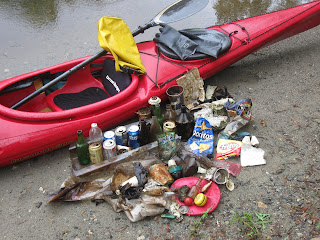 The 58 pieces of trash were composed of 16 recyclable containers (4 redeemable) and 42 pieces of miscellaneous rubbish which included my first ever yo-yo.  My YTD total stands at 3277.
Posted by Al at 3:55 PM