A Little Trash Pedaling on the Nashua River Rail Trail 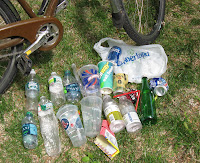 Mrs. Trashpaddler and I took advantage of this beautiful morning and pedaled our bicycles from Ayer to East Pepperell on the Nashua River Rail Trail (NRRT).  Along the 7.5 mile stretch we encountered the trash pictured at left.
Because the NRRT is a corridor used by bicyclists, roller bladers, and pedestrians any trash found there was more than likely carried in by trail users and left behind.  Therefore, it makes a good example of present-day littering habits.  Looking at the breakdown of trash one might think that the trail is trying to tell us that a modification to our Massachusetts bottle bill is in order.  Of the 17 plastic or glass containers, only 4 had a redemption value.  Net value = 20 cents.
Had this same trash been recovered in the state of Maine, it would have been worth 70 cents.
Would that modest value be enough to keep it from being tossed or provide enough incentive for someone to pick it up?  I think the answer might be yes to both.  At a minimum it allows for the possibility of redemption.  Make that redemption value a dime, as it should be, and I have no doubt most of this trash will disappear from our environment just as it did back in 1983 when the original bottle bill went into effect.
The groups that oppose modifying the bottle bill keep saying that community recycling programs are now adequate to render the bottle bill obsolete but they have no answer for how to deal with our "snack on the run" lifestyle.

In addition to expanding the scope of the bottle bill, how about Dunkin Donuts, Cumberland Farms, Seven-11 and other "On-the-Run" retailers offerering a redemption value on the containers that bear their company name?  Like those big slurpy cups that are frequently dropped to the ground when empty.

Two interesting finds today were on railing fence posts.  One was a plastic bag that had been hung on the fence post with trash inside.  Possibly, because the litterbug was concerned the bag might blow away, he (or she) had placed 2 large stones inside to weigh it down.  This same technique had been used with a large plastic slurpy cup several miles away.  So where does this type of person fall on the evolutionary ladder?  And which way are they going? Up or down?  For that matter, which way are all of us going here in Massachusetts?