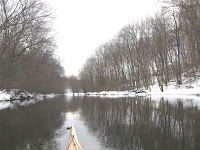 Combining this morning's warm spring-like conditions with ample open water on the Sudbury River gave me all the ingredients necessary for a pleasant trash patrol.  At Little Farms Road the parking area was plowed out and getting to the water required trudging through only about 50 feet of calf-deep snow.  My boat easily slid over the top of the snow to the water's edge.  There was no ice shelf to deal with.
Once launched, I paddled upriver through the small riffle between the oxbow openings and stopped at the first eddy where some wood ducks had been hanging around.  Out of my dry-box came my music-listening device and once the earbuds were in place I turned it on wondering which song would cue-up.  Appropriately, it was the late Fred Neil's song, The Dolphins starting things off nicely with "This old world may never change.  The way it's been....."
I can't put into words just how great it felt to be back on the river and gliding along its surface!
As usual, trash was there for the taking, "same as it ever was" and my rear hatch was filling at a steady rate.  By the time I'd rounded Otter Neck and the Saxonville Mills came into view I had 58 pieces of trash onboard.... 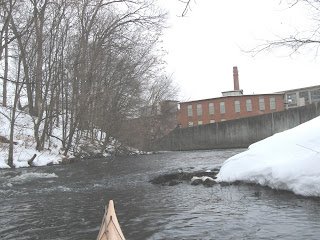 This marked my turnaround point and, after doing so, I dodged several orange shopping carts lying partially submerged between the mills and Concord Street.
Just a little before reaching the Danforth Street bridge, I noticed some glass protruding from the riverbank. Checking closer revealed an old milk bottle still intact. It was a square Cream Top bottle and bore the faint markings of the Twin Maple Farm, Saxonville, and the slogan "Honest Quality Built Our Business". I would later find on the Internet that Twin Maple Farm was a dairy operation located, not far from the river, on Meadow Street and until 1966 they would, each morning, dispatch a fleet of delivery trucks to their customer's homes.  The milk bottle, posed for this photo, after it was cleaned up a bit... 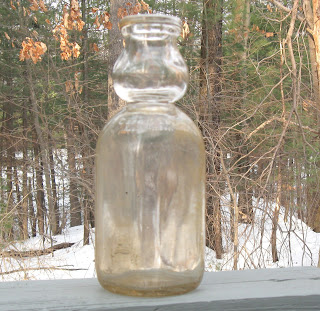 Note that the lower opening at the neck is a smaller diameter than the top opening.  This provided a chamber for the cream to reside in.  I wonder how many times this rugged bottle was filled with milk, emptied, cleaned, and re-filled again for different customers.  It was about as far from our present single-use/throw-away containers as one could get.  Maybe they were on to something.
Once back at Little Farms Road, the day's catch posed in the snow... 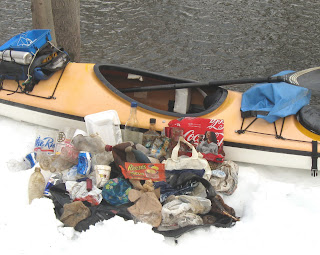 There were 61 pieces of trash in today's haul and it broke-down as follows: 18 recyclable containers (4 redeemable) and 43 pieces of miscellaneous rubbish such as 21 empty plastic bags, a bicycle tire & tube, and some styrofoam containers.  My YTD total stands at 145.
Posted by Al at 7:06 PM

Great work, Al.
Nice to see you back on the water instead of huddled around the wood stove.

Yup - nice to see you are back on the water. I'm going to try to do some paddling today as well.

I used to live in Saxonville and my father delivered milk from Twin Maple Farms. I hope that old bottle is holding some tulips on a kitchen table somewhere.

Anonymous, Hopefully, you have a bottle since your Dad worked there. If not, and you would like one, your welcome to have this one. I agree that it should be on a table or windowsill with a tulip in it.