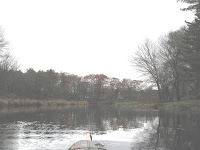 A little while back I was contacted through this blog by a fellow concerned citizen, J.R. Killigrew, who desired to join forces with me on one of my upcoming trash patrols.  Late this morning, just as the rain was letting up, we did just that and jointly trash patrolled a section of the Assabet River in Hudson.  We launched our boats at Cox Street and began paddling upriver against a steady current bolstered by the recent 1.5 inches of rainfall.
Working both sides of the river simultaneously, it didn't take long for us to gather-up an eclectic mix of trash.
J.R. proved to be an adept trash paddler and seemed right at home on the water as this picture shows... 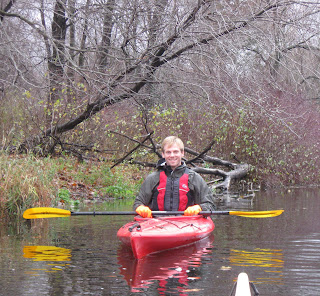 It's good to see young people such as J.R. eager to pitch-in with river cleanups.
J.R. would later put together this video from this trash patrol...

The trash pictured below was recovered from our joint patrol of a 3/4 mile section of river. 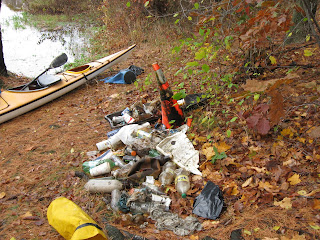 The total was 86 pieces of trash and the haul broke down as follows: 38 recyclable containers (8 redeemable) and 48 pieces of miscellaneous rubbish such as a traffic cone, a "Torpedo" plastic sled, some styrofoam items, and numerous plastic bags snagged in the brambles.  One apothecary bottle from Toomey's Pharmacy in Hudson was found.  YTD total 5732.
Just as I was leaving the launch site, a group of duck hunters were preparing to get in a late day hunt for wood ducks.  They reported having had recent success in taking green-winged teals from the Sudbury River.
Posted by Al at 5:32 PM

I think we crossed paths on the Nashua river a few years ago. I haven't been paddling much this season due to a shoulder injury, but I hope to meet you out on the Assabet next year.

Maybe you can share your technique for retrieving trash when you have to nose the kayak in to shore to get to it. I've tried flipping stuff up with the paddle, but haven't had much luck.

Dan, It most likely was not I you encountered on the Nashua River. It may have been Ed the Web Guy you ran into. I only recently discovered Ed's blog, http://edthewebguy.blogspot.com
when I saw it listed on the MA. Dept. of Ecological Restoration's October 2010 newsletter, "Ebb and Flow".
Ed has been trashpaddling the Squannacook and Nashua Rivers since 2004. His MyBrainShark piece is well worth checking.
As to your "kayak nose to shore" technique question, I try to launch my bow up onto the shore a bit, then use my paddle blade as an extension of my hand to draw the trash back to where I can reach it. The shape of my paddle blade is a bit concave, which helps. Good luck with your shoulder injury recovery and I'll look forward to seeing you out on the Assabet.

Hey Al, Dan, Perhaps it was me. As for the stuff close to shore, I do use the paddle to either push the trash to a place where I can grab it, or try to flip it up into the basket. If it's still inaccessible, I make a mental note and come back in higher water.
Hope that helps, keep up the good work Trash Paddler.