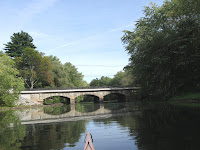 This  autumn afternoon I found myself back on the familiar waters of my local SuAsCo watershed.  I launched at Lowell Road and trash patrolled the Concord River down to Great Meadows Landing.
Right at the start of today's patrol, I encountered a couple in a canoe that were also recovering trash as they paddled along.
Water levels are still very low resulting in many bottles being recovered from the exposed muddy shore.  Just upstream of the Old North Bridge a partial bottle embossed with "Phenix Nerve Beverage Co." was found.   It may date from the late 1800's.  The name reminds me of a "Three Stooges" episode where the boys were selling some strange concoction guaranteed to cure all kinds of ailments.
By the time I reached Flint's Bridge (Monument St.), I had recovered 30 pieces of trash.  The bridge is pictured at upper left.

Just a little ways below the bridge, this immature hawk allowed me to approach within 10 to 15 feet... 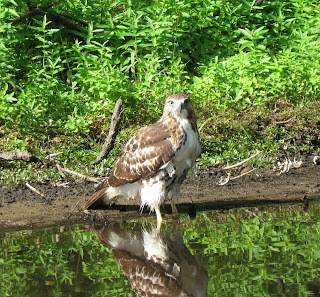 He ultimately flew a short distance to this tree limb where the reddish color in his tail may indicate his being a red-tailed hawk.  The young hawk did act strangely.  He kept opening his beak in what looked like a yawning motion, but made no sound. 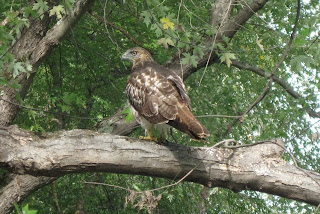 With the water level in the river so low, the outfall from Concord's Wastewater Treatment Plant can be seen... 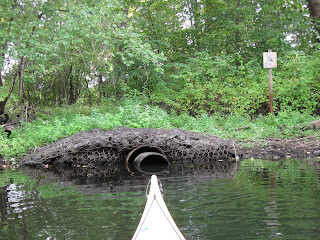 I can't help but to think that outfalls could be more attractively built.  Perhaps made to more resemble a stream entering the river through a rocky passageway and some kind of identifying signage would be nice.
At Great Meadows Landing, I and the entire ship's company went briefly ashore.  While today's refugees assembled along my boat's hull, I recovered two more plastic containers from the receptacle intended for monofilament fishing line.  The container is clearly marked "No Garbage".  I guess those empty plastic water bottles are just too heavy for some folks to carry out... 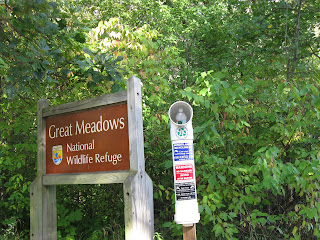 Once everyone settled down, a photo was taken of the assemblage. 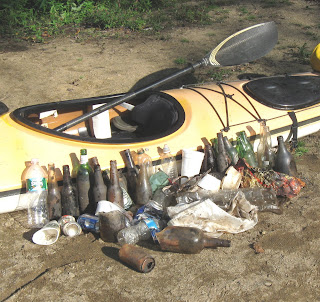 They numbered 56 pieces of trash and broke down as follows: 32 recyclable containers (13 redeemable) and 24 pieces of miscellaneous rubbish such as styrofoam, bubble wrap, plastic bags, and bait tubs.  My YTD total stands at 4788.
Posted by Al at 7:36 PM