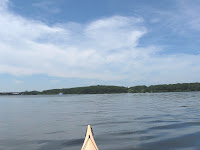 Just let me make it to the other side…

where hopefully I’ll be greeted by “What Cheer, Netop?” (or How’s it going, friend?)

It seems there is always an obstacle between a man in imminent danger and his finding safe refuge. It can be a mountain, a forest, an ocean, or a river. The obstacle facing Roger Williams in 1636 was the Seekonk River. Making it to the other side would put him beyond the reach of the Puritans in Boston. Roger had earned the distinction of being “Banished” following a trial in which the General Court convicted him of sedition and heresy. He had dared to utter “diverse, new, and dangerous opinions” such as: a man’s religion is between himself and his creator; the King of England has no right to give away land in the New World; and government should concern itself with only civil matters and not involve itself in matters of conscience and religion.

In January of 1636 the sheriff was dispatched to Salem, Massachusetts to apprehend the convict but Williams, having been tipped-off, had escaped. For the Puritans it was “Drats!”

It is said that Williams travelled overland by foot through the cold and snow 105 miles to Rehoboth, Massachusetts where he found refuge with the Wampanoags and their leader Massasoit. The great sachem saw no problem with helping Williams and readily provided him with a place to start a settlement. This plan was dashed, however, when the Puritans informed Williams that they held domain over all land to the Seekonk River. Massasoit, himself, should have been a little concerned to hear this news!

So, facing yet another obstacle, Williams and 11 of his friends paddled some part of the Ten Mile River to the point where it empties into the tidal Seekonk River.  This area today was being soared over by a pair of ospreys, and two mute swans patrolled the waters near the dam. This photo shows the Ten Mile River's water flowing over the dam and entering the Seekonk... 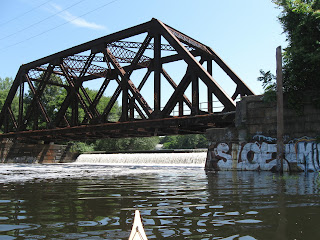 From that point Williams and his friends paddled across the tidal Seekonk River to where they were welcomed on the other side by the Narragansetts.  This photo shows the approximate location of their first landing spot (where the Narragansetts greeted them with "What Cheer, Netop?")... 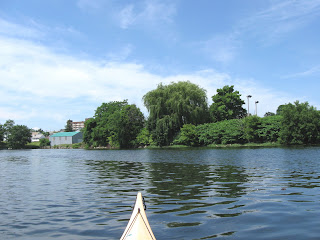 Upon meeting with that tribe’s leaders, Canonicus and Miantonomi, Williams’ group was advised to travel a few miles further west and north to a spot near the confluence of the Woonasquatucket and Mashassuck Rivers.  Retracing their path today required paddling through Providence Harbor and up the Providence River passing through the Hurricane Gates... 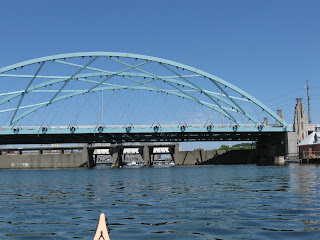 This docked tugboat was facing in the same direction and appropriately named "Roger Williams"... 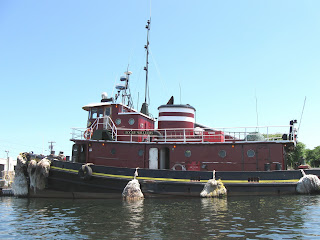 This is the confluence of the Woonasquatucket and Mashassuck Rivers and probably close to where they landed... 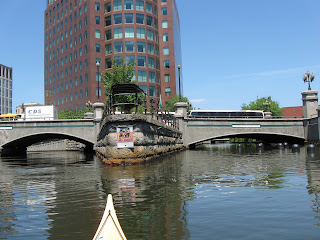 Somewhere, not far from this spot and near a freshwater spring, they started the settlement that would later come to be known as Providence and the colony that would ultimately become Rhode Island.  Williams wrote "Having made covenant of peaceable neighborhood with all of the sachems and natives round about us and having a sense of God's merciful providence to me in my distress, called the place Providence, I desire that it might be a shelter for persons distressed of conscience."
Hoping to find a marker of some sort indicating the actual landing spot, I headed further up the canal to the right but was unsuccessful in finding any marker.  Reaching a point where the water was becoming too shallow and narrow, I turned around and began the trip back to where I started.
In the ensuing years the Puritans lost interest in Williams and focused their attentions on destroying the Pequot people whom they were convinced were plotting against them. This was a recurring theme with the Puritans and started with Myles Standishs’ pre-emptive attack at Wessagusset. It seems the Puritans were convinced that nearly everybody was secretly plotting against them. In the war with the Pequots, the Puritans even enlisted the help of Mr. Williams and his friends the Narragansetts. Once the Pequot had been vanquished, however, the Puritans turned their attention back to Mr. Williams. In 1643, with Puritans now holding the power in England, they decided to have their charter expanded to include Williams' Providence Plantation. Surely this time they would get him! It was God’s will!

Faced with this dire prospect, Williams had no choice but to travel to England and plead his case. As he sailed across the Atlantic, having ample time on his hands, he decided to write a primer of sorts for anyone wishing to have interaction with the indigenous peoples. It was to become his first book entitled A Key Into the Language of America. As luck would have it, it became a “best-seller” in England where the populace was eager to hear about the strange peoples living in the New World. Words such as succotash, papoose, moccasins, and netop (Narragansett for friend) captivated folks’ imaginations and according to Wikipedia “Historians agree that the key that unlocked the door for Williams was his first published book, A Key Into the Language of America.” ...."It gave Williams a large and favorable reputation."  He left England after procuring a charter for his Providence Plantation and boldly sailed into Boston Harbor with letters signed by an impressive list of ‘royal type’ folks. He stayed in Boston very briefly however. Just long enough for a ‘Nah na nah, na nah nah’ moment!   Alas, for the Puritans it was “ Drats! Foiled again!”

Most of the above information was new to me as I really knew very little about Roger Williams other than his being the father of Rhode Island and there having been some issues between him and the Puritans. After recently googling something (I cannot, for the life of me, remember what it was) I ended up stumbling on to the whole story of Mr. Williams. The book he wrote, A Key Into the Language of America, came as the biggest surprise to me and was something I thought no Englishman had done the likes of.
I especially enjoyed the way he approached writing his Key. Instead of composing a dictionary of Narraganset (Algonquian) words and their English counterparts, he looked at the various components of life and divided them into 32 chapters. He starts with a chapter on salutations and then proceeds to cover eating, sleeping, names/numbers, blood/marriage, family/household business, parts of the body, discourse /news, time of day, season of year, travel, the heavens/stars, weather, winds, fowle, fruits of the earth, beasts, the sea, fishing, clothing, religion, government, commerce, hunting, gaming, warfare, painting, sickness, and ultimately concludes with death and burial. In other words, all the stuff that really matters in day to day life. Sadly, very few of the early settlers bothered to write down such observations. Williams, by doing so, provided us with at least a glimpse into what life may have been like before the arrival of Europeans to this continent. In reading his Key it is also apparent that he was open-minded and didn’t feel the need to discredit customs different from his own.

His Rhode Island became a haven for independent-minded folks and, several years later, another man would come to live alongside the Narragansetts. His name was Joshua Tefft and for 14 years he and his brother farmed land adjacent to the Great Swamp where the Narragansett Tribe spent their winters.

In 1675 war broke out between the Wampanoags and the Puritan United Colonies of which Providence was not included. Sure enough, the United Puritans decided that the Narragansetts were secretly plotting to join the Wampanoags. Therefore, they launched a pre-emptive strike against the Narragansetts’ palisaded winter stronghold. The battle was said to be a fierce one and costly for both sides. Once the Puritan forces penetrated the palisade and gained control of the fort they found the lodges within were filled with women, children, the old and infirm, and all their winter’s stores of food. Faced with a dilemma of what to do, they decided that God would want them to lay waste to the lot and they lit fire to the huts. Hundreds of people burned to death.

Within a few days of the battle and subsequent massacre, word was spreading that an Englishman was seen fighting alongside the Narragansetts and had shot one of the Puritan soldiers. Joshua Tefft was shortly arrested and questioned. Oddly, present at his interrogation was a very old Roger Williams now captain of the Providence militia. I'm left to wonder if Williams went on record concerning the attack and Tefft's role in helping the Narragansetts.  At any rate, Tefft’s claim of being forced by the Narragansetts to fight in their behalf was rejected and this time the Puritans would not be denied their pound of flesh. Joshua Tefft became the only Englishman in New England ever convicted of high treason and was given the full horrific punishment that was ‘all the rage’ at the time. He was hung by the neck (but taken down while still alive), disemboweled (while still alive), then beheaded and quartered. Quite a high price to pay for helping his friends and neighbors defend their homes from an unprovoked attack!  The only satisfaction denied the Puritans was they were not allowed to take possession of his land and property. The Rhode Island authorities prevailed in seeing that Tefft’s family at least retained that.

If the passage of time be the judge, Roger Williams’ legacy grew and strengthened while the Puritans were left to chase after more of the demons inside their heads. Yes, you guessed it! They heard some witches up in Salem were plotting against them!

A trash patrol hadn't been planned for today, but this lot of trash was within a fifty foot radius of where I launched and landed my kayak at Bold Point Park.... 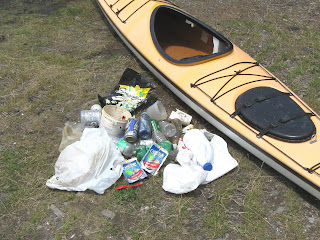 The count was 36 pieces of trash. The breakdown: 13 recyclable containers (2 redeemable) and 23 pieces of rubbish such as plastic bags, styrofoam, bait tubs, etc. YTD total is 3135. (I should note that I launched away from the busy (and less trashy) boat ramps and closer to where shorefishermen frequent.)

The Seekonk River was busy today with both shorefishermen and guys fishing from boats.  One group of boat fishermen were having very good luck near the railroad bridge with the permanent upraised span.  I couldn't tell what species they were catching but they seemed quite pleased with the action!

While reading about Roger Williams I discovered this great web site.  Clicking on their "Where to go paddling" heading will take you to a listing of "Water Trails" which includes the one I paddled today.  Without their web site, with listings of water trails and launch sites, my retracing of Roger Williams' route would not have been possible.
Posted by Al at 7:16 PM

I was working in Providence yesterday. I wish I knew you’d be paddling through - I would have I would have walked out to say hello. Providence has done a nice job integrating the river into the city.

Another refugee from Puritan Boston was William Blackstone. Two years before Roger Williams established Providence, Blackstone built his house in what is now the Lonsdale section of Cumberland. While the exact location is lost, its generally believed to be just below the Pratt Dam – I paddle there often.

Erik, I agree that Providence really has done a nice job! It was great to experience the heart of the city while gliding along in my kayak. Many folks looked to be enjoying their lunch break alongside the river/canal and it was a beautiful day for it.
It was also interesting to see the boats and stockpiles of wood used for the "River Fire" events. Unless you passed under the bridges you would never know all that stuff is stored there.
Thanks for the info regarding William Blackstone!