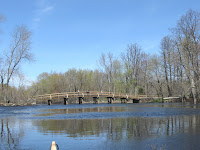 Today provided a nice opportunity to conduct a trash patrol of the Old North Bridge area before the arrival of the British.  Skies were sunny, temperatures pleasant, and a busy breeze gave the water a rippled surface in places.
Wildlife seen today were mallards, a wood duck, Canada geese, a red-tailed hawk, a white-breasted nuthatch, painted turtles, and a beaver with whom I briefly paddled alongside till he tail-slapped the water and disappeared below.
Trash from the great flood still lingers amongst the brambles and back eddies.  Between Egg Rock and Great Meadows Landing 148 pieces of trash were netted.  The day's catch broke down as follows: 54 recyclable (6 redeemable) and 94 pieces of misc. rubbish such as nip bottles, fishing gear, styrofoam and plastic bags.  The majority of the trash was found just upstream of the North Bridge and just downstream of Flint's Bridge or Monument Street.  My YTD total stands at 1641. 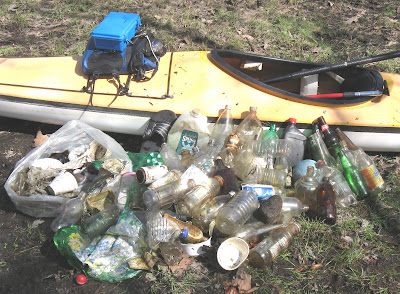