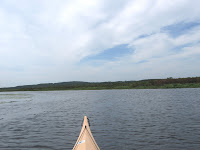 Late this morning I found some pleasant solitude while trash patrolling the section of the Sudbury River that bisects the large expanse of marsh between Sherman's Bridge and Route 27.
After encountering some of the more usual wildlife such as a belted kingfisher, blue herons, a few sandpipers, and a green-backed heron, I came upon this less usual great egret... 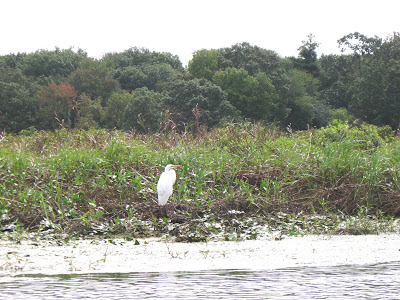 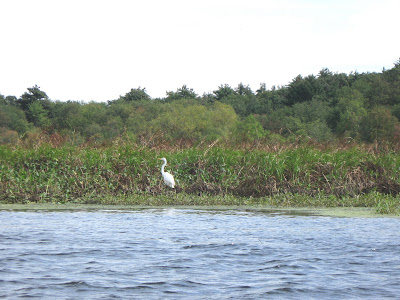 By the time I reached Rt. 27 I had only 3 pieces of trash onboard. This number quickly climbed to 18 after patrolling the area on either side of the bridge. Heading back downriver I soon discovered that another element of nature had joined us. A breeze of 20 mph out of the northeast was was taking full advantage of the wide-open expanse to buffet my progress nearly all the way back. Now, I knew why the trip upriver had seemed so easy!
The only other person seen on this stretch of river today was a fellow kayaker who was doing a little fishing while drifting with the wind.
By the time I reached Sherman's Bridge my trash count had reached 28 pieces. Most of the stuff looks old and must have been hiding somewhere till recently... 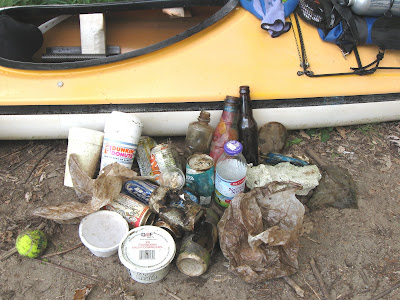 Of the 28, 8 were recyclable (4 redeemable) and 20 were misc. rubbish such as styrofoam and plastic bags etc. My YTD total stands at 3824.
This upcoming Saturday morning the Assabet River and its tributaries are going to be scoured for trash by a large group of volunteers participating in the Organization for the Assabet River's 23rd Annual Assabet River Cleanup. This event is a large scale operation conducted simultaneously in 8 watershed towns. More information can be found here.
Posted by Al at 3:56 PM

Heads up - Major pollution happening in the Sudbury river right now. Yesterday, underneath the new rt 9 bridge in Framingham over the Sudbury river, the wind was blowing thousands of pieces of scrap styrofoam into the river. I drove by this morning and there was no clean up or prevention going on that I could see.

There's a open bardge under the bridge covered with more stuff that could be prevented from entering the river if immediate action is taken now.

I emailed the Mass EPA this same message just 2 mins ago. Thought you might like to know. Please keep up the good work.

Anonymous, Thanks for the 'heads up' about the construction debris entering the river. Glad you notified MADEP. Hopefully they will get in touch with the bridge contractor and the material can be recovered before it goes too far downstream.
If you receive a response from your email, please share it.

I paddled back up yesterday to check. The guys at least cleared off the bardge. That was obvious. But, there was no evidence of any other clean-up activity. I did see a beaver, though. No kidding.

Unfortunately all that blew into the river is on its way to sea, eventually. And, it was still beautiful out there.

Anonymous, Your concern is probably what resulted in the barge being cleaned up and helped prevent additional material from entering the river. Nice job!

Hopefully some of the styrofoam will be intercepted on its way downriver.

Where do you launch from when paddling this stretch of the Sudbury River?

There is a canoe launch at Kellogg street.

The rain seems to have washed the unsightly stuff down stream. I doubt any downstream clean up was performed. Don't know.

Saw a beaver upstream from damn in Ashland, yesterday...

Mark, Thanks for sharing info regarding a launch site for that stretch of river.

Think I intercepted one of the pieces of styrofoam you mentioned earlier. Last Thursday, picked up a block about 3-feet long, 1-foot wide, and 6" thick. Regards, Al