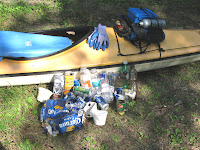 Could we be enjoying any better weather than this? On one hand, it's like "Pinch me, this can't be real", and on the other, the old New England Puritan guilt within me is saying "Oh, are we ever going to pay for this!". So, despite any dire consequences, Mrs. Trashpaddler and I decided to combine a moonlight paddle, sunrise at Fairhaven Bay, and a trash patrol all into one. With great stealth we launched our kayaks into the lower Sudbury River shortly before 5 AM and began heading upriver under the full "Corn Moon". An owl's hooting rang out from the nearby trees and we could still hear it nearly a half mile upstream. Beavers notified their friends as to our progress upriver via their tailslaps at frequent intervals. Blue herons observed stoically from the banks whereas belted kingfishers were very active with considerable chattering. At Clamshell Bank we surprised a deer and in the darkness could only makeout the white tail 'flag' as it vanished into the tall elephant grass.
A solo canoeist emerged from the river's west bank downstream of Heath's Bridge heading in the same direction.
Reaching Fairhaven Bay we found the sky much brighter but the sun was still below the tree tops. Landing on Brooke Island we paused to watch it climb above the ridge. At this point I discovered the batteries in my camera were dead. Note to self: Carry extra batteries!
With the new day now underway we re-launched and began heading downriver. The sun had awakened Mr. Wind and a cool breeze was stirring out of the northeast. It served as a reminder that fall is approaching.
At Heath's Bridge a brief shore raid netted a quick and dirty dozen pieces of trash. The beach was piled with water chestnut plants that had been pulled from the adjacent waters. Someone had performed a difficult task.
Once back at our put-in location Mrs. Trashpaddler landed and went home to attend to other commitments. Before doing so she promised to meet me later and bring a couple of camera batteries.
Now alone, I paddled further downriver and just below the Nashawtuc Road bridge encountered a bedded down doe only 15 ft from the water's edge. At first I was concerned that the deer may be dead and so turned around and quietly paddled back. Shortly I was eye to eye with her and she was quite healthy. She watched as I pulled away, having never moved anything but her neck.
At Egg Rock I headed down the Concord River to Saw Mill Brook which became my turnaround point. On the trip back, the riverine corridor was coming alive with human activities both on the water and off. Canoes, kayaks, fishermen, birdwatchers, joggers, and North Bridge tourists were now in abundance. Two fishermen in a power boat with a dead engine were trying to make it from Monument Street down to Rt. 225 with only their trolling motor to propel them. Hopefully they reached the boat ramp.
Back on the lower Sudbury River, a rendezvous was made with Mrs. Trashpaddler where, with new camera batteries installed, the opening photo of today's modest haul was taken. It ran the gamut from a can of Arnold Palmer half & half iced tea/lemonade complete with multiple photos of the great golfer to an old medicine type bottle of listerine bearing the Lambert Pharmacal Company name. The count for the day was 27 pieces of trash. Of these 21 were recyclabe (19 redeemable) and 7 were misc. rubbish such as styrofoam and plastic. My YTD total stands at 3796.
Posted by Al at 12:21 PM

Boy Al, I think I missed you by only a few hours, as I set out from Old Calf Pasture bound for Sherman's Bridge at noon. That was the only section of the Sudbury north of Framingham center that I had not done yet. Hope to meet you on the water some day and thank you in person for all you do for our local rivers.

That section was very clean, no doubt due to your recent sweep. I do pick up some trash that I encounter but nothing like your staggering year to date total. If I see someone with a pile of trash strapped to their stern I'll be sure to stop and say hello!

Thanks Brett, You sure picked a perfect day to paddle your final stretch of the Sudbury! Must have made for a pleasant journey.
I'm sure we'll run into each other one of these days.

I photograph the Sudbury river from Framingham up to Sudbury's Pelham Island through Great Meadows all the way up to Bridge Rd in Concord. I've been bumming around the river for about a year.

I use Google maps' satellite feature to find areas where I can photograph new sections by land. Going by land has been sufficient for the past year but looking at the maps has shown me vast area which I can't even walk out to due to the marshlands. I purchased a canoe last fall and we may run into each other this season as I intend to fully cover the river and photograph it.

As far as the trash goes it truly is a shame how disrespectful people are of our reserved lands. I had thought to find cleaner areas in Concord, Sudbury, and Wayland than in Framingham, but I was wrong. It was sad to see how many plastic bottles were floating amongst the ducks, geese, swans, and occasional beaver.

Gary, Thanks for dropping by and best of luck with your new canoe. Hope it gets you some great photographs!
I'll look forward to meeting you on the river one day.