Where the Arbella Dropped Anchor 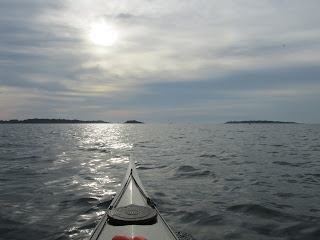 I never gave much thought to where the Puritan 'Great Migration' flagship, Arbella, dropped her anchor back in 1630.  Guess I knew it was in Salem and that the ship carried the Massachusetts Bay Colony's new governor, John Winthrop...he who aspired to build a "city upon a hill".  Unfortunately, he also believed the King of England had the right to give away huge swaths of land in America.  Roger Williams tried but failed to convince Winthrop otherwise.
Recently I came across an edited version of the journal Winthrop kept during a three month crossing of the Atlantic Ocean and read his first-hand account of the Arbella's coming to anchor in Salem Sound:
Saturday, June 12, 1630 "...As we stood towards the harbor, we saw another shallop coming to us; so we stood in to meet her, and passed through the narrow strait between Baker's Isle and Little Isle, and came to an anchor a little within the islands."
That sentence led me to check my charts and find that the "Little Isle' mentioned was quite likely today's Little Misery Island.  Coincidentally, the Misery Challenge, an event which my daughter and I enjoy participating in, was KO'ed by the COVID virus, like so many other group events of late.  So while the usual Misery Challenge experience couldn't be enjoyed last weekend, I might, at least, experience my own little taste of "misery" and, at the same time, possibly encounter the Arbella lying at anchor.
The opening photo shows my approach this past Friday early morning to the islands mentioned by Winthrop...Bakers Island to the right and the Misery Islands (Little and Great) to the left.  Present-day nautical charts show the Salem Channel running between the islands and on a straight WNW heading to Hospital Point... 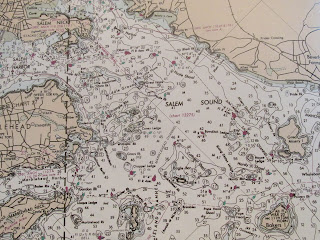 The Hospital Point Lighthouse which I'd passed earlier... 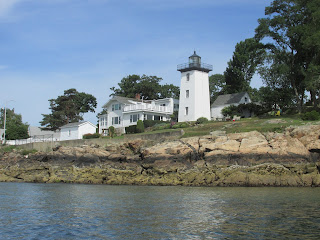 .
In searching for information as to where "a little within the islands" might be, I stumbled upon an article presented at the February 1930 meeting of the Colonial Society of Massachusetts:
"The Course of the Arbella from Cape Sable to Salem".  The paper was read at the meeting by Samuel E. Morrison and was a followup to an earlier article by Mr. Horace Everett Ware.  After examining all the evidence, Morrison states that the Arbella "...may have anchored anywhere off the Beverly shore between Allen Head and Hospital Point" but Morrison's personal preference was"...from a quarter to a half mile off Plum Cove"...

If they did anchor off of Plum Cove they might have enjoyed this view of Smith Point... 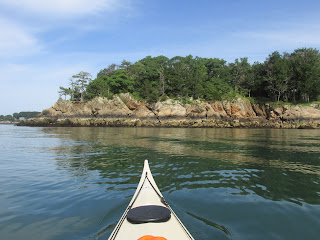 From this spot they could also have looked into Salem Harbor... 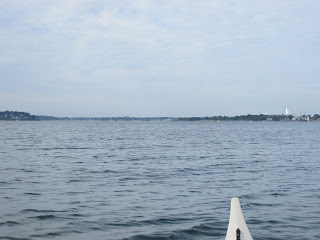 Members of the advance team who'd been in Salem for more than a year making preparations came out to the ship.  Later that same day Winthrop, his assistants, "some other gentlemen, and some of the women, and our captain, returned with them to Nahumkeck (modern Salem, MA) where we supped with a good venison pastry and good beer, and at night returned to our ship, but some of the women stayed behind.  In the mean time most of our people went onshore upon the land of Cape Ann, which lay very near us, and gathered store of fine strawberries.  An Indian came aboard us and lay there all night."
The following day, Sunday, June 13, 1630: "In the morning, the sagamore of Agawam (Ipswich) and one of his men came aboard our ship and stayed with us all day."  Many believe this sagamore of Agawam was Masconomo who may have paddled out from Manchester Harbor where today there's a park named for him.
One story leads to another...Winthrop and the Arbella would later sail to today's Boston Harbor, go six miles up the Mistick River, and later stop at "Nataskott" where Captain Squib of the ship Mary and John was encountered.  Winthrop discussed with Squib the west-country people Squib had deposited at Nataskott and "ended a difference between him (Squib) and the passengers" (a polite way of putting it).  The group of west-country people mentioned included Roger Clapp who was the subject of a recent post and Winthrop seems to have verified Clapp's account.
During a break in the action I landed on Little Misery... 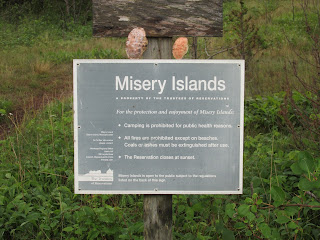 ...where from the island's high point the strait between it and Bakers Isle could be viewed... 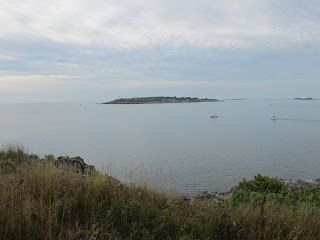 Before leaving Little Misery I enjoyed my second salt-water swim of the season and gathered up some trash... 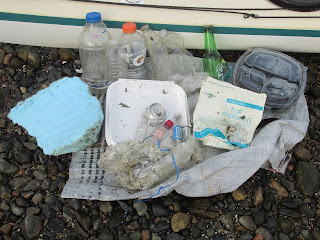 Then it was time to ride the incoming tide to and up the Danvers River... 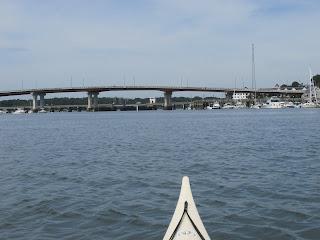