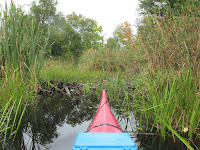 In ascending waterways a paddler often reaches the point where further navigation looks doubtful.  It's where the paddler must decide if the effort needed to continue is worth making.  Will the paddler be rewarded by additional miles of passage, or just a couple of yards?  For a recreational paddler, like myself, the consequences of such a decision are not that critical either way.  Allow me to make a parallel here to the journey of  the Mashpee Wampanoag people.

After recently reading an article Battle Brewing Over Tribes Planned Taunton Casino by Sean Murphy in the Boston Globe (1/13/2016), I've found myself pondering the long and difficult journey the Mashpee Wampanoag Tribe has been making against a strong current for several centuries.  It has not been a recreational journey, but rather a journey undertaken for their very survival as a people.  Despite obstacles at almost every turn they've continued to keep on keeping on and, finally, just when it now looks like they may have achieved their goal, a new obstacle has arisen in the form of a threatened law suit...not by a government entity, but rather by so-called concerned citizens.

Fair warning...if you the reader continue beyond this point you'll be entering a man-made quagmire unlike any I've ever heard of.

The making of this quagmire began way back in 1934...in the depths of the Great Depression.  The Roosevelt administration was offering America a New Deal, and one component of that deal addressed Native Americans and was called the Indian Reorganization Act (IRA).  The act was a radical departure from the government's previous policy of encouraging Native Americans to assimilate into the general population and give-up their old ways and customs.   Under the Indian Reorganization Act the Bureau of Indian Affairs (BIA) would help to strengthen, encourage, and perpetuate the tribes and their historic traditions and culture.  A key feature of the act granted the BIA the authority to take land into trust for "persons of Indian descent who are members of any recognized Indian tribe now under federal jurisdiction."  That sentence didn't create too many problems until after the Indian Gaming Regulatory Act of 1988 went into effect and allowed federally recognized Native American tribes to generate income from gaming (aka casinos).  Many tribes in the northeast had already been pursuing federal recognition for many years.  The federal recognition process requires a tribe to meet seven criteria:
Meeting those criteria is not easily done, and for many tribes located in the northeast the process took many years regardless of the fact that these tribes existed long before Europeans arrived upon their shores.

Two Connecticut tribes the Mashantucket Pequots and the Mohegans achieved federal recognition in 1983 and 1994 respectively.  Rhode Island's Narragansett tribe was recognized in 1983 and the Mashpee Wampanoag Tribe of Massachusetts in 2007.
Both the Mashantucket Pequot Tribe and Mohegan Tribe were successful in having land placed into trust by the BIA and subsequently built casinos (Foxwoods and Mohegan Sun) which operate to this day.
However, when the Narragansett Tribe of Rhode Island applied to have some of their land placed into trust (for elderly housing), then Rhode Island governor Don Carcieri filed a lawsuit challenging the BIA's right to place the land into trust.  The governor lost his challenge in court and appealed.  His appeal lost but he doggedly pushed on with still another appeal to a higher court and lost again.  However his third attempt at preventing the Narragansett tribe from having land placed into trust went to the US Supreme Court where the justices spent considerable time parsing the sentence "persons of Indian descent who are members of any recognized Indian tribe now under federal jurisdiction".   The word "now" became the deciding factor with the majority ruling that the IRA of 1934 applied only to Indians recognized by the federal government in 1934.   Really?  Can you imagine the Civil Rights Act applying only to folks who were existing in 1964 when the act went into effect?
At any rate this decision is what created today's quagmire in regards to the Mashpee Wampanoag.  A "Catch 22" resulting from the meaning given to one word "now".
Confusing?  Yes...but wait, there's more.

The state of Massachusetts legalized gaming in 2011 announcing there would be three regional casinos licensed in the state.  I, for one, was pleasantly surprised when I heard that the Mashpee Wampanoag would be given first preference in being granted the license for southeastern Massachusetts...provided they could get land placed into trust.  I was prouder still when I saw my state displaying patience in waiting several years for the process to unfold.  However, other, competing interests (non Native American) grew impatient and wanted the state to stop waiting for the tribe to receive a favorable decision.

In 2014 the United States Department of the Interior issued a 26 page memorandum addressing this issue thoroughly and concluded as follows: "The Department will continue to take land into trust on behalf of tribes under the test set forth herein to advance Congress' stated goals of the IRA to provide "land for the Indians".
On December 31, 2015 true to their word the BIA took 321 acres of land into trust for the Mashpee Wampanoag.  This should be the final resolution...however the competing interests are now threatening a lawsuit following the path of R.I. governor Donald Carcieri in parsing the word "now".

I sincerely hope that those trying to derail the Mashpee Wampanoag tribe from having their land placed into trust will take the time to read the earlier linked US Dept. of the Interior memorandum before getting everyone bogged-down in the quagmire.

Parsing words can become a slippery slope as I recall from my own childhood.
My father was explaining to my brother and me the family motto "Dixit et fecit" and very seriously stated it was a phase in Latin meaning "He said, he did".  My younger brother responded by saying perhaps it meant "He said he did" as in someone deflecting blame for not having done something he was supposed to have done!  I remember my father being less than amused.  I was amused as Mo, Larry, and Curley instantly came to mind.   Another phrase comes to mind here from the 1976 movie The Outlaw Josey Wales where the Native American character Lone Watie recalls a US government official having told his tribe's leaders that they must "endeavor to persevere".  Haven't the Mashpee Wampanoag people " endeavored to persevere" long enough? 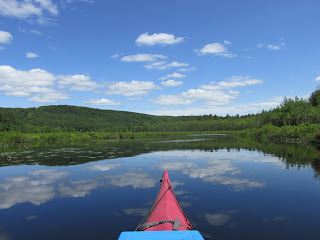