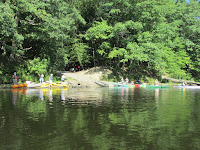 Another first Saturday of the month and another trash patrol by Denise Hurt and the New Hampshire Appalachian Mountain Club Paddlers.

A colorful fleet consisting of 12 kayaks and 2 canoes disembarked from the Greeley Park boat launch on the Merrimack River in Nashua, NH.  The conditions this morning were splendid and being out on the river was splendiferous.

Our goal was to recover any trash found along its banks, and to that end one contingent went downstream while the other went up.

After 3 hours we rendezvoused back at the boat launch and combined our mostly full crates of refuse... 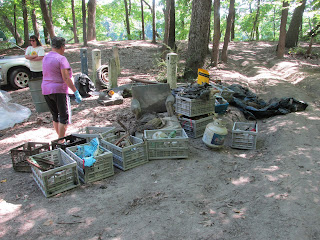 ...before beginning the especially fun process of sorting out the recyclables from the rubbish... 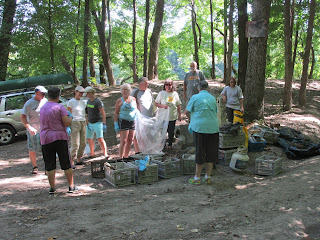 We ended up with a count of 125 recyclable containers, and 417 pieces of miscellaneous rubbish which included 2 inflatable rafts, a wheel/tire, an easy chair, various automotive parts, a broken mirror, and a propane tank.

One more patrol in this year's series and the word on the water is it'll be on the Nashua in Pepperell.
Posted by Al at 8:41 PM