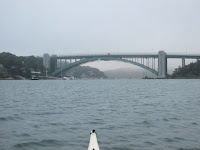 Upon waking in my tent early yesterday morning an occasional whooshing sound caught my ear.  It was the wind blowing through the trees and sounded a little stronger than what had been mentioned in the weather forecast.  However, it being the day of the Cape Ann Rowing Club's annual Blackburn Challenge, I needed to get my boat into the Jones River and paddle over to registration/check-in at Gloucester High School on the Annisquam River.  The trip over was made even quicker by having the aforementioned wind at my back, and my passage to and under the A. Piatt Andrew Bridge (at left) was a swift one.   Only problem was that the course of the race would have us going in the opposite direction and into that same wind.  One benefit, however, was unseasonably cool temperatures which would keep folks from overheating.

Prior to the event I'd run into several rowers and paddlers who'd traveled from afar to participate in this year's Blackburn.  Chris, who'd completed the tough Yukon River Quest, came down from Canada (Ottawa) to tackle his first Blackburn in a Clipper hybrid canoe/kayak.  Also from Canada (Nova Scotia) were Fenton and Russell who would be, once again, rowing the approximately 20 mile course in a banks dory (photo in previous post).  On the small beach by the High School I parked my boat next to this sleek Rapier by Valley Kayaks and its owner Marshall from New York State... 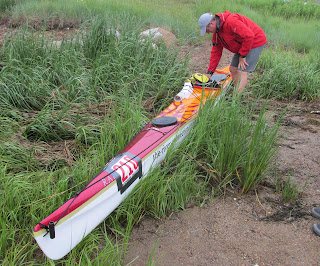 ...who previously paddled sea kayaks a little wider in the Blackburn.

At the start line there were a few peaks of sun as racers awaited their respective heats... 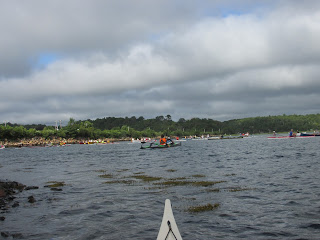 Just before my class got underway, the organizers mentioned there being reports of 4 foot seas outside of Lanes Cove...and we were off, heading up the Annisquam River towards Ipswich Bay.  The first indication of trouble was the Gloucester Harbormaster's boat heading fast towards the mouth of the Annisquam. There, the outgoing tide was being countered by the wind from the north at a shallow sand bar and had capsized several boats.  Not an encouraging sight.

Further along, off of Lanes Cove, I came upon a rower struggling to re-enter his rowing scull.  He was being helped by a couple in a tandem sea kayak and, after several failed attempts, was able to re-enter his boat.  The couple in the sea kayak had put themselves broadside to the waves, despite not having spray skirts for their respective cockpits.  Fortunately they had a pump aboard.

For me the toughest section was off Halibut Point in Rockport where one particularly nasty wave gave me a horizontal deluge that felt like a hit upside the head and persuaded me not to turn my back to the seas until safely past Milk Island.

Reaching the finish line more than 4 hours after starting I noticed a lot fewer boats on the beach than usual.  I'd later hear that out of 230 boats some 57 or so elected to pull out of the event somewhere along the course.  It's been a long time since conditions at a Blackburn Challenge were that challenging...possibly 2000.

This video of the event was shot by Marty Luster and posted on Good Morning Gloucester.


This errant gang of refuse found along the Annisquam got to accompany me 'round Cape Ann... 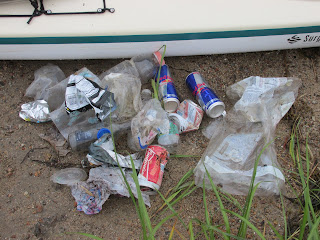 ...and provided just the right amount of ballast.
Posted by Al at 5:46 PM

wow ! I saw that video of Marty's last night and was wondering how you did - those empty Red Bull cans must have really helped !

Yes but scary to think of what would have happened had they been full.