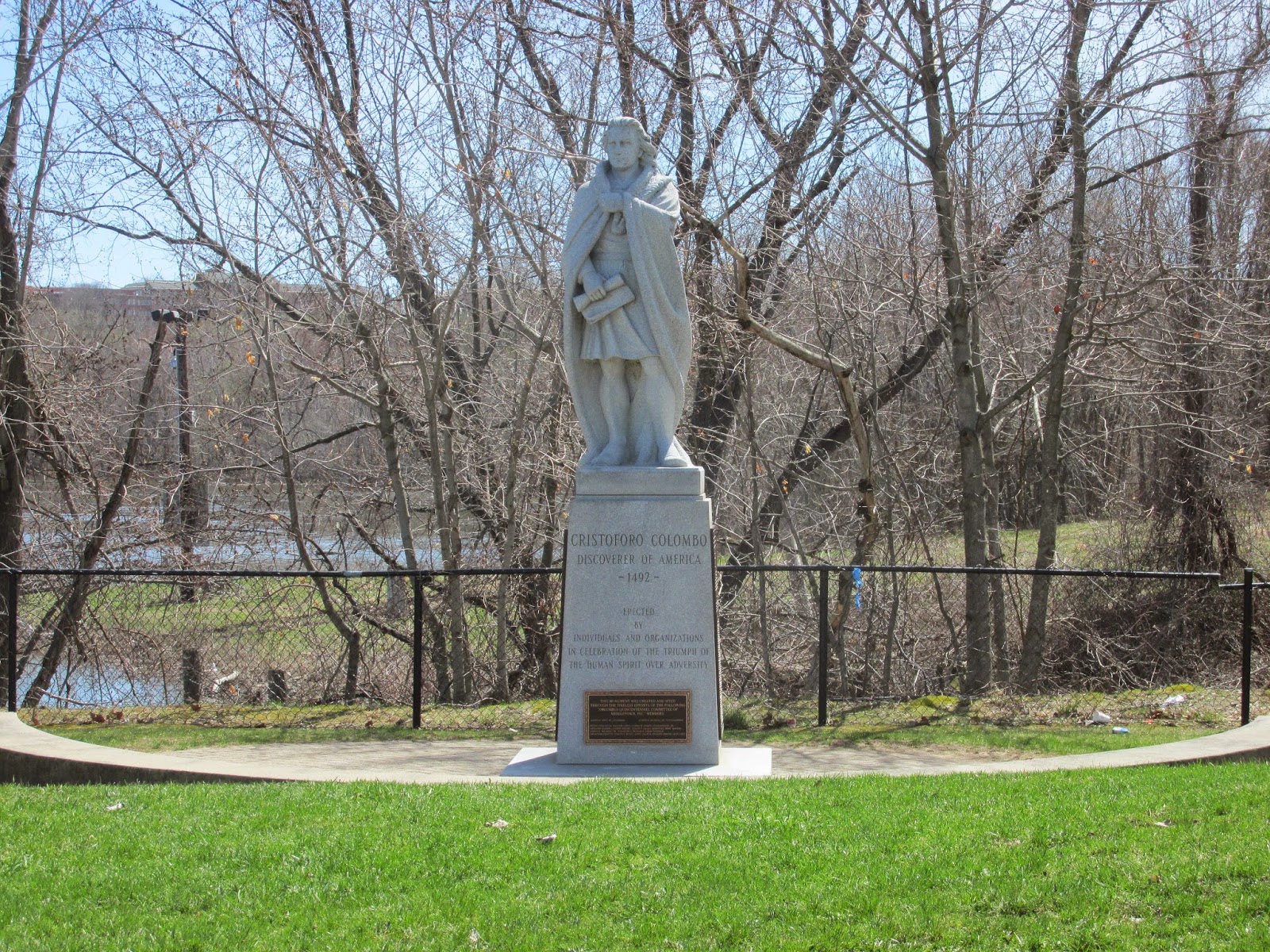 It was nice of Cristoforo Colombo to see us off yesterday morning at Harbor Park in Middletown by a swift flowing Connecticut River.   After consulting the Connecticut River Boating Guide Source to the Sea, Paul, Tom and I decided to paddle the approximately 14 miles down to the river's confluence with the Salmon River in East Haddam, CT.

The park is located downstream of the Arrigoni Bridge and an abandoned railroad bridge, and near the point where the primarily southerly flowing Connecticut veers to the east before settling on the southeasterly course it will follow for its last 30 miles. is on the small side with parking for about a dozen cars (additional parking across the street at dirt lot).  There were no toilet facilities (perhaps too early in the season?).

Once launched Tom and his boat were framed by the aforementioned upstream bridges... 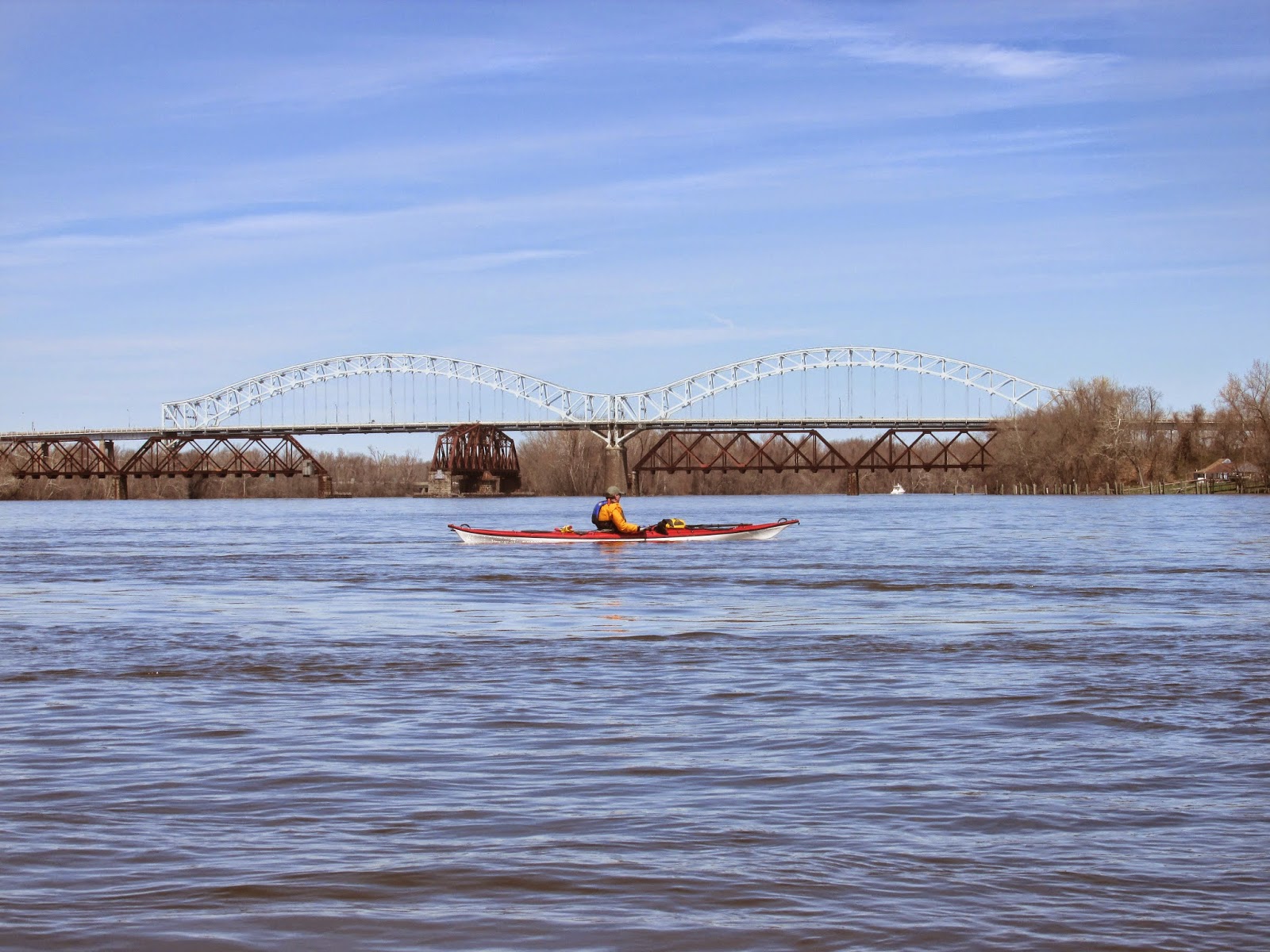 Then we were off with the swift current helping us to easily maintain 6 mph and soon approached Bodkin Rock and the "Straits"... 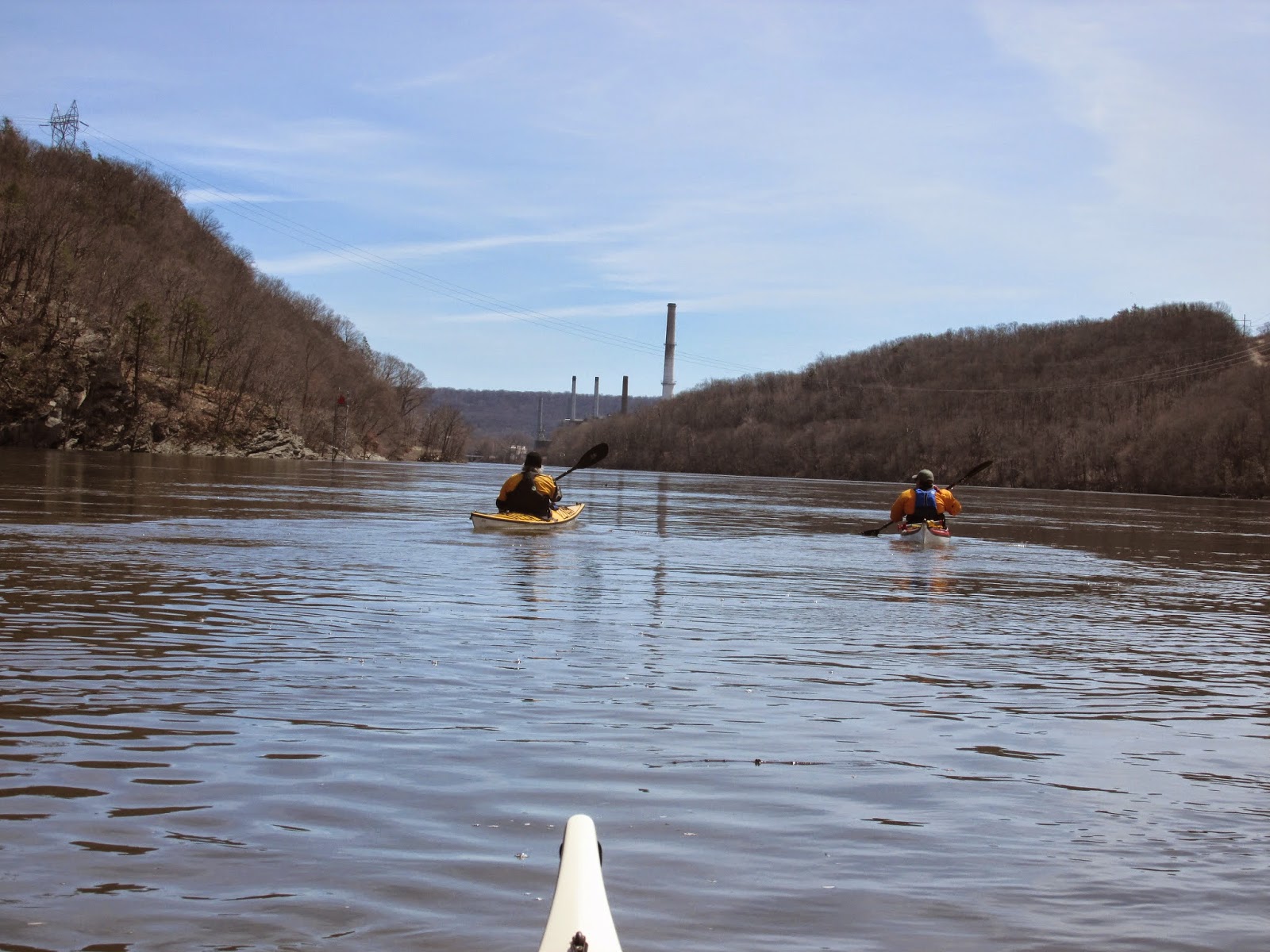 Proving, once again, the importance of location, the Native American people who lived in this area were known as the Wangunks which is said to mean in Algonquian "people of the bend".

Following a lunch break at Hurd Park we resumed our easy downriver passage. Near Higganum a stiff breeze out of the south and the last stages of an incoming tide combined to slow our progress considerably.

From there to our takeout at Salmon River it was hard work, hugging the eastern shore as much as possible.

We passed on visiting Haddam Island and only stopped briefly at the former Connecticut Yankee nuclear power plant site to check out the controversial orange barricade... 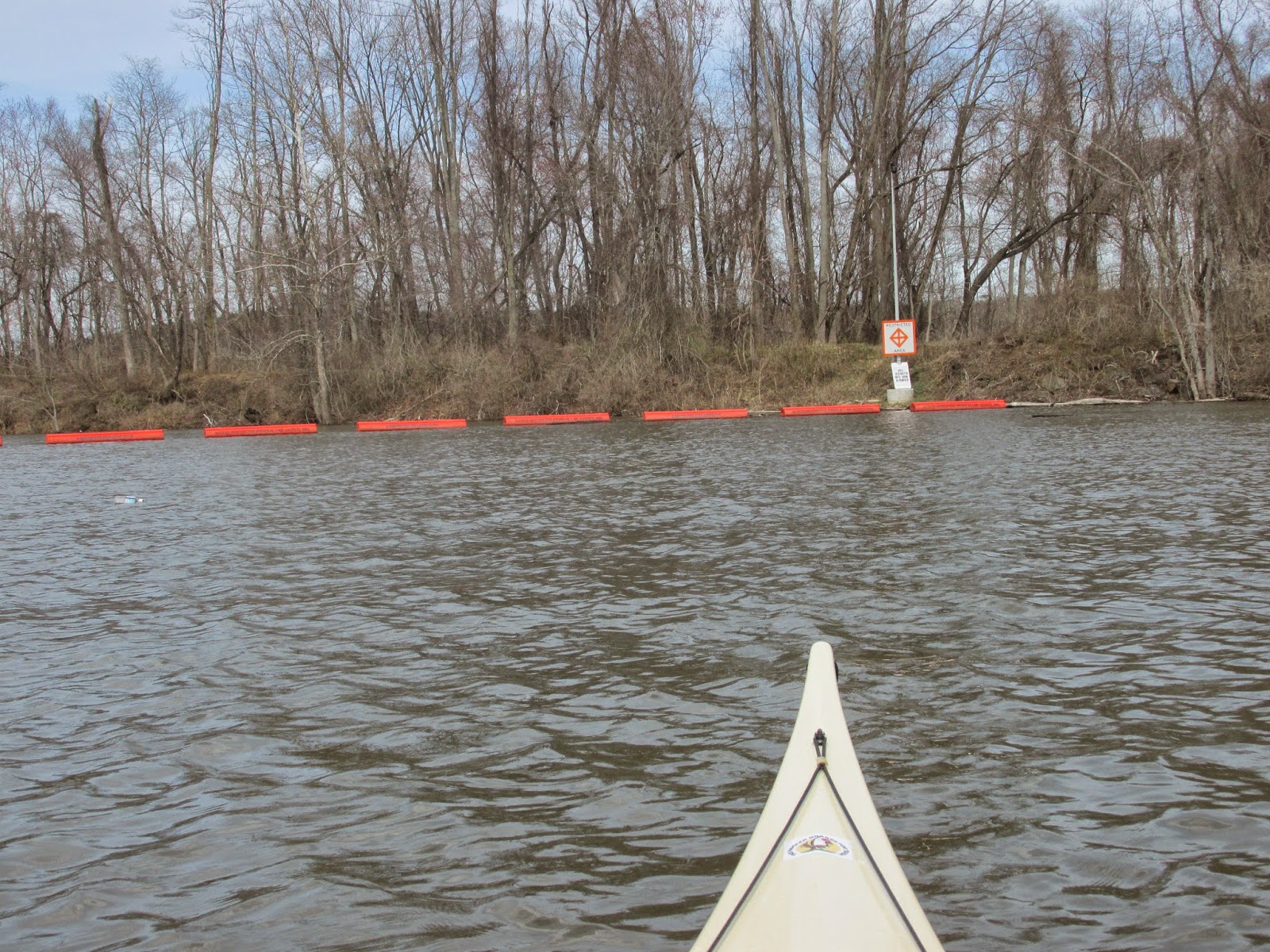 ...preventing boaters from accessing the one mile long canal which once carried cooling water from the plant.  The canal was open to boaters after the plant's closing in 2007, but was barricaded in 2013 due to security concerns related to the storing of spent fuel rods at the site...a reflection of our post 9/11 world I guess.  Recent news reports, however, indicate the barricade may soon be removed.

This area where the plant once stood is known as Haddam Neck, and this link provides an excellent overhead view of the neck looking to the south.  The Salmon River is to the left.

A small sampling of the considerable trash seen along the river's banks... 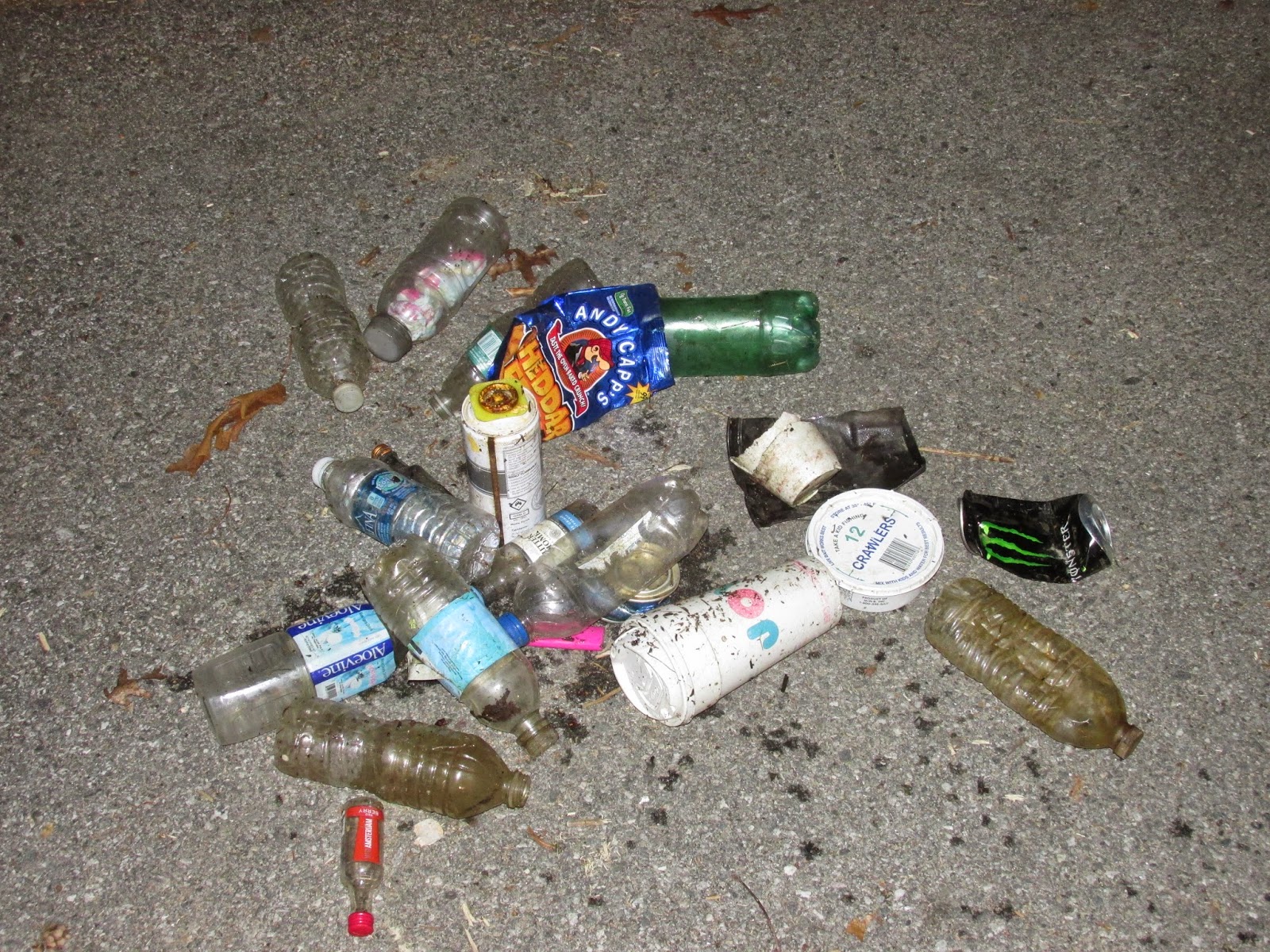