A Too Inviting Nashua River? 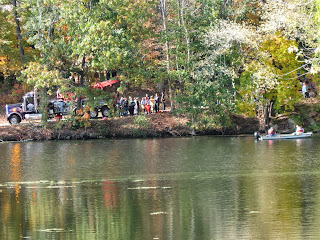 Yesterday's sunny skies and fall foliage drew many folks, including Mrs. Trashpaddler and me, to the Nashua River.  Unfortunately for one automobile driver who was temporarily distracted (according to news reports), his car decided to take the plunge into the river and disappeared into 20' of water.  The accident happened on Pepperell's Canal Street just upriver from the Pepperell Dam.  The driver was able to escape through his driver's side window which, fortunately for him, was open.
The above photo was taken from the Nashua River Rail Trail on the opposite side of the river and shows crews preparing to retrieve the car from the river. 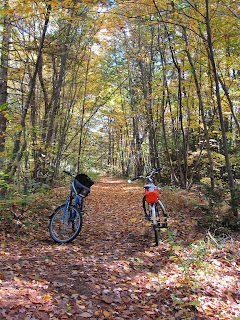 Only 7 pieces of trash were encountered along the trail.   Five of them were empty plastic non-carbonated beverage containers which might someday have a redemption value if we update our Massachusetts Bottle Bill.

Hey Al, we definitely need to update the bottle bill. I've expanded my trash collection to River Street when I walk my dogs. Way too much trash thrown out of the cars, onto the roadside. Thanks for all you do to keep our rivers clean and beautiful. Cheers, Concord River Lady