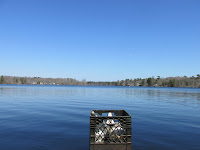 After finishing my work on Cape Ann late this morning, I decided to take advantage of a brief period of nice weather. I would get in some first-time paddling on Chebacco Lake before an approaching cold front would bring clouds, wind, and rain showers.  The opening photo is looking north from near where I launched at the state boat ramp in Hamilton.
The lake is really a 209-acre "Great Pond" and is a natural body of water having no dams.  Herring are said to still enter this pond from the sea via the Essex River and Alewife Brook (the pond's only outlet).  Today found Chebacco Lake completely free of ice.  There are numerous cottages along much of the shoreline with most having boat docks, so my guess is there's a good amount of power boat traffic during the warmer months.  Today, however, I had the whole lake to myself...well except for some buffleheads... 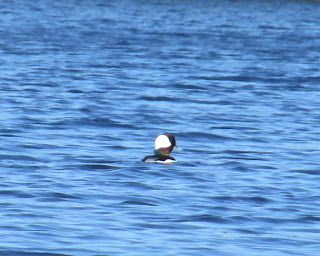 ...and ospreys, mallards, a belted kingfisher, and a blue heron.
As I paddled along the lake's northwestern corner, I recalled reading an article many years ago about several large icehouses operating here, and how a branchline of the Boston and Maine Railroad was used to ship the ice.  The article was A Recollection of the Essex Branch by Dana Adams Story and appeared in the Boston and Maine Railroad Historical Society's Winter 1975-1976 Bulletin .
Where the long abandoned railroad passed closest to the lake, I went ashore and snapped a photo looking east down the old roadbed towards Centennial Grove in Essex (a picnic resort built in 1876)... 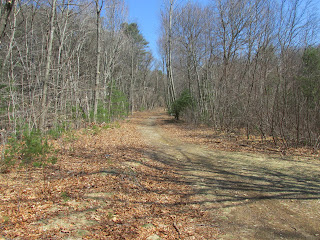 The spot where I was standing was near the end of "ice-house bend" and, according to the article, the folks who operated the picnic facilities at Centennial Grove "Upon hearing an incoming train whistle for the crossings up the line, a member of the family would run to count the cars as they came around 'ice-house bend'.  By so doing they could tell how much clam chowder to make."
Once back in my boat, I decided to paddle on over to Centennial Grove to see it for myself... 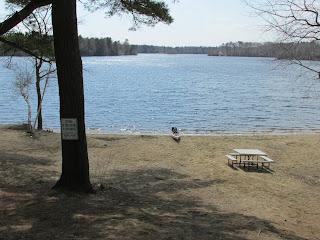 It's a beautiful location and I imagine it still sees a lot of picnics, though the railroad line was abandoned in 1942 after 70 years of operations.  Today, I was the only picnicker and, unfortunately, there was no clam chowder awaiting.  The above photo looks to the south and the wind was now building out of that direction.
I saw online that many scenes in the 2010 released movie "Grown Ups" were filmed on and around Chebacco Lake and Centennial Grove.
Enroute back to my starting point I passed this interesting building that appears to be a relic from the past... 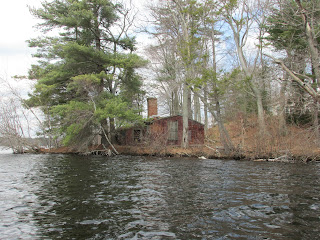 Looks like a nice spot!
Back at the boat ramp my passengers gathered hullside... 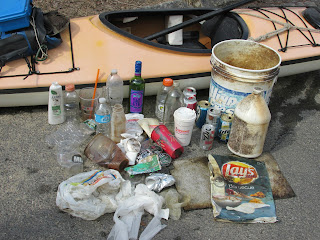 There were 17 recyclable containers (6) redeemable and 22 pieces of miscellaneous rubbish such as plastic bags, styrofoam cups, and a 5-gallon plastic pail.  YTD = 1274
About half of today's trash was found in the vicinity of the boat ramp.﻿
﻿
﻿
﻿
﻿
﻿
Posted by Al at 9:40 PM

Al,
Another interesting note about Chebacco lake... I remember reading that this was the spot where the first powered aircraft flight in New England took place, off the ice. I may have read about it on the Plum island airport website.

Hello Mike, Thanks for the link: http://www.boston.com/news/local/massachusetts/articles/2010/02/28/100_years_ago_first_plane_took_flight_in_region/
Quite an interesting story...and hard landing on the ice!

How's the fishing been? Any pike yet this spring?