It was on this day five years ago that Trashpaddler.com was born.  Man, does time fly!  Pieces of trash recovered since that day total 29,088.

Yesterday, the last piece of 2012's river flotsam (aka trash) was packed into the old Boston and Maine Railroad boxcar, and the big door slid shut.  This morning the (virtual) local freight arrived at South Acton Junction and the boxcar was pulled from the siding (snow removal crew did a great job!)... 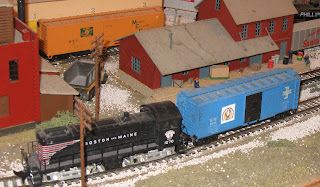 Once coupled to the rest of the small train, the engineer gave those of us sitting on the loading dock two quick blasts of the horn and the "2012 Trashpaddler Express" pulled slowly out of town.

Earlier, I had carefully filled out the bill of lading-

A total of 6914 pieces of trash were recovered during 2012 and the composition of the trash was as follows:

Terrestrial Patrols numbered 30 and netted 556 pieces for 18 per patrol.

The year's most interesting piece of trash, to me, was the floating beer keg found in the Sudbury River.  Getting it out of the river was explained in this post.  Properly disposing of it was another matter, and explained in this post.  The beer keg demonstrated to me the importance of an empty container having a monetary value.  Beer and bottled water companies are very protective of their company owned containers.  We could all take a lesson from them.  One town has responded to the growing problem of homeless containers having no value.  The Town of Concord, Massachusetts became the first town in the United States to ban the sale of bottled water in single-serve plastic bottles holding 1 liter or less. This new ban will take effect tomorrow. Refillable water bottles are the way to go. Now if only the bottled water folks would get onboard and start providing their home-delivery customers with small refillable containers bearing their company logo. That way the reusable 5-gallon dispensers in the home could be used to refill smaller bottles for responsible use by folks when "on the go".
I think that might be called "sustainability" and "being part of the solution", or something like that.

This item in last week's Concord Police Log demontrates another disposal problem we face.  The log mentions a report of 30 tires having been dumped illegally behind a strip mall near the Assabet River. We, as a society, need to identify the things we want to prevent from entering the environment, and eliminate any financial impediment to their being properly disposed of. Any disposal fee for such identified items should be paid at the time of purchase.  In addition to tires, this should also apply to computer monitors, televisions, and fluorescent light bulbs.  Bring em' to the local transfer station and they'll be accepted no charge!

Getting back to the rivers, my favorite wildlife encounter of 2012 was coming upon this white-tailed deer crossing the Assabet River in Concord on a late October morning at sunrise... 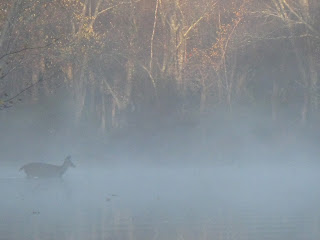 Looking ahead to 2013, when a coffee craving sends you to Dunkin' Donuts, please consider going small with your coffee and DD will reward you with a non-polystyrofoam cup!

Love the deer picture you were telling me about. Really nice! You ever think about putting your pictures in a book? You are such a good writer, you could do a paddling book, picture book, paddling trail history book,etc...
Think about it! :)

Ellen, Thanks for your kind comments. I value your opinion.