A Dandy Dalliance on the Danvers River 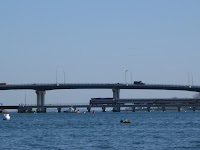 Mother Nature seemed to be in an apologetic mood today and was rewarding us all for putting up with her wild mood swings these past few weeks.  I, for one, was willing to forgive and forget while launching my boat into the Danvers River.  Work had brought me earlier in the day to Cape Ann and those work-related chores were wrapped up just as the sun began to burn through the clouds.  I ask you, how could I have driven past the fine boat launch at Pope's Landing on a day such as this?  Temperatures were in the upper 60's!
I began my trip downriver to Beverly Pier one hour after high tide, and the ebb was just beginning to get started.  Water levels were still high enough, however, to provide access to washed up trash along the riverbanks that slope down from the Kernwood Country Club golf course.  Nearly all of today's trash was found along that stretch of river.

Once past the Essex Bridge (opening photo), I turned around and began heading upriver.  The flow of water draining out of the adjacent North River was being boosted by a strong southwest wind resulting in a sideways current under the Essex Bridge.

On the way back I stopped to check out these faded images on the side of a Danversport fishing (?)shack... 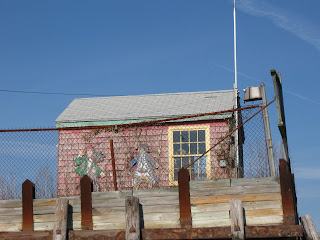 They may be commemorating an event that occurred in Danversport back in revolutionary times.

Today's bounty from the sea (shore)... 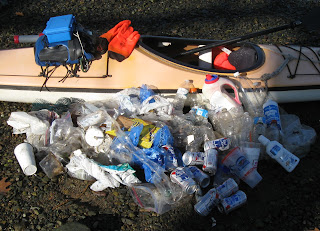 There were 41 recyclable containers (15 redeemable) and 59 pieces of miscellaneous rubbish such as plastic bags, and styrofoam cups.  YTD = 6301