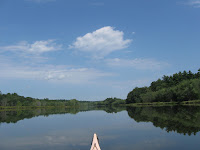 Work unexpectedly found me in Bedford near mid-day and in reasonable proximity to the boat launch at Rt. 225.  This sometimes busy boat launch was unusually quiet for a Friday.  Once on the water I headed downriver enjoying the summerlike conditions.  Two ospreys were seen being harrassed by smaller birds.  Belted kingfishers and blue herons were also encountered.

Arriving at this small island between Rt. 4 and Rt. 3 had me wondering how close this might be to where John and Henry Thoreau made camp on the first night of their 1839 Concord/Merrimack journey... 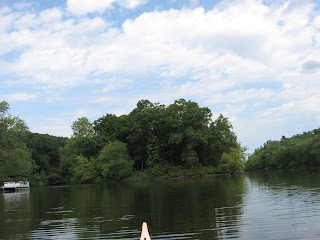 The Concord River Boater's Trail published by the Sudbury, Assabet & Concord Wild & Scenic River Stewardship Council shows the above island as Jug Island and mentions Thoreau having called it Grape Island.  So, where was the other smaller island (or peninsula) he referred to as Fox Island (after having heard foxes while camped there)?  If Thoreau's distance of 7 miles below his starting point is correct, Fox Island may have been near the present Rt. 4 bridge.
On the way to and around Jug and back, numerous beer cans were encountered along with a few plastic containers... 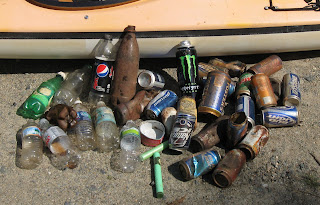 There were 31 recyclable containers (21 redeemable) and 5 pieces of misc. rubbish.  YTD = 5315
Regarding plastic water bottles, the Massachusetts Attorney General ruled this week that the town of Concord's ban on plastic water bottles containing one liter or less is constitutional.  This clears the way for the ban to take effect this coming January 1st.
﻿
Posted by Al at 9:25 PM

Bet John and Henry Thoreau never left any plastic trash in the river? ;-)

Mike, That sounds like a pretty good bet to me!
Henry wrote this account of one of his own Assabet River trash paddles in a more innocent time: "Found a good stone jug--small size--floating stopple up--I drew the stopple & smelled as I expected molasses and water or something stronger (black strap?) which it HAD contained--Probably some Meadow hay-makers jug left in the grass which the recent rise of the river has floated off--It will do to put with the white pitcher--I found & keep flowers in--Thus I get my furniture.
From Journal of Henry David Thoreau November 9,1855.