Redeemed for Recycle or Worthless Trash?

Consider, if you will, a once progressive state's dilemma as to how to deal with this... 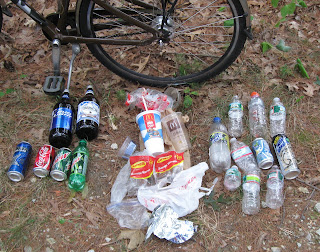 The above photo shows the litter recovered this afternoon from a three mile section of the Bruce Freeman Rail Trail in Chelmsford, Massachusetts.  It is fairly typical of what can be seen trailside, streamside, or roadside these days.

Under our state's bottle bill, the 6 containers on the left can be redeemed for recycling with a 5-cents per container reward for doing so.  The remaining plastic containers have no value and therefore offer no incentive to insure recycling.  Too often, these containers escape recycling and end up in incinerators or buried in landfills.  I don't think anyone (even bottle bill opponents) sees that as an acceptable solution.

A recently approved bill by the Massachusetts Senate to expand the state's bottle bill would provide a redemption value of 5-cents to the 10 plastic containers on the right, and this would go a long way in insuring these additional containers are recycled versus burned or buried.

Expanding the state's bottle bill to include these previously exempt containers is a viable solution to this problem.  The bottle bill demonstrated its effectiveness back in 1983 when it gleaned the state of empty beer and soda containers.

Opponents of expanding the state's bottle bill don't offer a solution to the problem of littered containers, and I'm beginning to think they just don't see it as a problem.

Over the next three days, a 6-member legislative committee comprised of senators Gale Candaras, Stephen Brewer, and Richard Ross, and representatives Joseph Wagner, Brian Dempsey, and Kevin Kuros will be debating this issue.  If you have an opinion on the matter, please consider contacting them to let them know how you feel.

Thanks for this post and for helping us (can I speak for "us?") take action on an expanded bottle bill in Massachusetts. We need it!