An Ascent of the Exploits River in Diplomatic Hopes 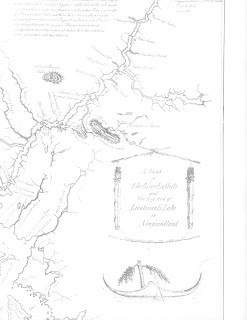 In the name of His Majesty, King George the Third.


WHEREAS the Native Indians of this Island have by the ill treatment they have received from mischievous and wicked Persons been driven from all communication with His Majesty's subjects and forced to take refuge in the woods and have continually resisted all efforts that have since been made to invite them to a friendly intercourse, and Whereas it is His Majesty's gracious pleasure that every exertion should still be used to accomplish an end so desirable, for the sake of humanity. All persons are hereby enjoined and required on meeting with any of these Indians or of those who may resort to Newfoundland to treat them with kindness so as to conciliate their affections, and induce them to come among us and live in friendship with us, And as a reward to any Person who shall zealously and meritoriously exert himself as to bring about and establish on a firm and settled footing an intercourse so much to be desired he shall for the great service which he will thereby have rendered to His Majesty and to the cause of humanity receive the sum of One Hundred Pounds and shall moreover be honourably mentioned to His Majesty and shall find such countenance from the Governor and such further encouragement as it may be in his power to give. Or if the exertions of any person shall so far only succeed as to afford the probable means of effecting this object and as inducing a single Indian to communicate with us, through whom something more might be accomplished, or if any one shall discover their place of resort so as that an attempt may be made to treat with them, such person shall receive such lesser reward as the Governor shall deem adequate, and his services shall be acknowledged as they may deserve. And all Officers and Magistrates are commanded and enjoined to maintain and support good order and behaviour towards the said Indians, and in case any Person or Persons shall murder or commit any outrage upon them to use their utmost endeavours to apprehend such offenders and bring them to justice.
Given at Fort Townshend, St. John's, Newfoundland, this first day of August, 1810.
J. T. DUCKWORTH.
By Command of His Excellency,
R. C. Sconce.

When the above proclamation was issued by the Governor of Newfoundland, Sir John Thomas Duckworth, the situation of the large island’s indigenous people was already dire.
Apparently, recognizing the gravity of the situation, Duckworth also authorized an expedition under the command of Lieutenant David Buchan to travel aboard the schooner Adonis to the Bay of Exploits and the Exploits River area. The goal of the expedition would be to establish communication with the Beothuk. After meeting with no success in the Bay of Exploits, Lieut. Buchan waited for the onset of winter and for the Exploits River to freeze over before proceeding along it. After securing the Adonis near where the river enters the bay, they embarked on foot pulling sledges loaded with supplies and presents. What follows is Lieut. Buchan’s narrative, as reported to the Admiralty, of that difficult endeavor. Both the proclamation and the narrative are from James P. Howley’s book The Beothucks or Red Indians written in 1915. Some of the terms used by Buchans have a different meaning today. He uses the word deer for what are today called caribou and when he mentions Canadians it is believed he’s referring to Mi’kmaq Indians or other tribes from the continent. Rather than provide a link, I cut and pasted the text of his January 1811 trip. It is a bit long but, none the less, held my attention throughout.

After reading Lieutenant Buchan’s narrative, I found him of admirable character and could sense his frustration at things going so badly. With only a few kinder twists of fate his mission could have resulted in possibly saving a people from extinction. Both he and they deserved better in my opinion. The simple inability of either group to communicate their intentions to the other was most tragic.
Narratives such as this are, without a doubt, my favorite form of history and often result in my later visiting the locales where such pivotal events took place. If I am fortunate enough to visit Newfoundland again, I hope to paddle into the Exploits River and retrace some, or perhaps all, of their route to Red Indian Lake. Now, to get my hands on some red ochre!
Posted by Al at 1:08 PM

Did you type this all or can you capture the text in some way?

Not at my typing rate of 5 words per minute! Text was cut and pasted from Howley's book which is on the Internet at:
http://www.mun.cal/rels/native/beothuk/beo2gifs/texts/howley17.html

or simply 'google' "The Beothuck or Red Indians".