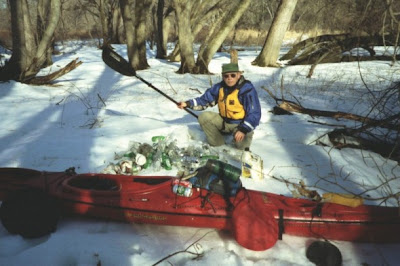 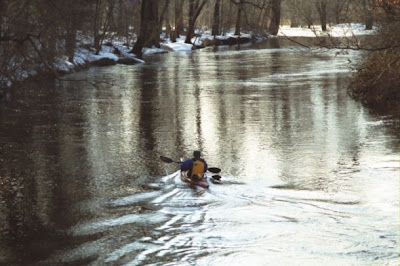 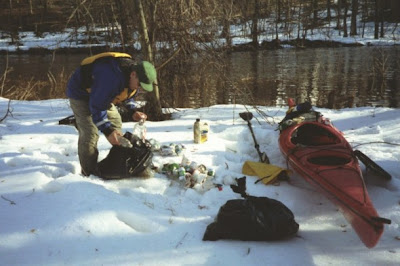 Old Man Winter winked today and gave us a taste of mid-March. After another 4 days of warm temperatures, the ice that stopped me last Tuesday was gone. All the melting snow combined with yesterday's rainstorm resulted in the highest water levels since last spring.
A perfect day to ascend the Assabet River!
Immediately upon entering the Assabet at Egg Rock, I espied several beer bottles on the river right. Paddling closer revealed a mother lode of bottles and cans, half in the water and the other half on the river's bank. After recovering the ones in the water, I landed my boat and began picking up the ones on shore. Spent over an hour here gathering 80 containers and then stashing them in my boat. One container was a 1-gallon plastic bottle filled with used motor oil. Cannot imagine why someone would dispose of oil this way, but at least they had the cap on tight.
Re-launching my now much heavier boat, I began paddling upstream against a fairly strong current. By the time I reached West Concord, I had over one hundred containers on board. Called my wife by cell phone and she agreed to meet me at Pine Street and help unburden my boatload of trash. This being such an unusually big haul, we snapped a few photos which I hope to post here soon.
Re-launching my now much lighter boat, I paddled under the Pine Street bridge and up to the large blowdown near Damondale. With the work part of my outing over, I enjoyed a cup of hot cocoa and a power bar before letting the current turn my bow downstream. The trip down was a joy with such a swift flow and springlike warm temps. Picked up another 24 containers on the way back to give me a total count for the day of 128. Year to Date = 131.
Posted by Al at 8:05 PM