Today marked my first real springtime trash patrol. Temperatures approaching 60 degrees allowed some of the more artic-like gear to be left in the closet where hopefully it will now reside until next winter.
At my launch site, the little bit of ice that was there moved away after only nudging it with my foot. No hatchet work needed today!
On my way to Egg Rock I recovered 2 bottles and this 3 foot diameter 'Snow Tube' that was half full of water. 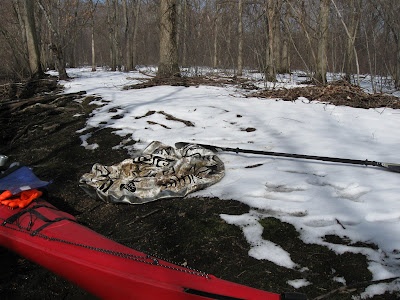 Getting underway again I heard the sound of a small outboard engine and soon this motorized kayak appeared. 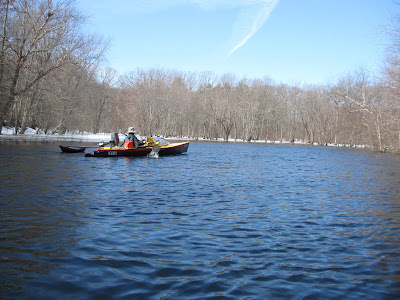 The kayak had one outrigger and the motor was attached between the boat and outrigger. In talking with the owner I discovered that this was the same boat I used to see in Sandy Bay (Rockport, MA) out around the Salvages. Back then, about 8 years ago, the owner and his wife would be undersail using two outriggers, and their pet iguana would be lounging under a plastic canopy on the foredeck. Not something you see everyday!
Right after encountering the motorized kayak, a nice wood canoe was seen heading upriver on the lower Sudbury and at Lowell Road, two more kayakers were launching from a spot from where they had just chopped through the ice. The river was jumpin!
Just upstream of the North Bridge I recovered some floatable trash and came across a container used by Geo-Cachers. Geo-Caching is an activity that involves placing a 'treasure' somewhere and then providing the longitude and latitude coordinates to those who will try to locate it using GPS (Global Positioning System). This particular treasure (a jellybean container) had ended up submerged in the water and the contents were soaked. It brought to mind a variation on Geo-Caching used by some fellow river janitors in Minnesota. Mike and Julie Anderson developed a technique they call Geo-Trashing and it involves using GPS to pinpoint the locations of debris hotspots and also large items such as tires, appliances, etc. The coordinates and also photographs can be used later in facilitating the removal of the trash. The rivers they work are the Mississippi and St. Croix in the Minneapolis area. You can read about their activities on their CleanUpTheRiver.com blog
After passing under Flint's Bridge at Monument Street, I saw my first red-winged blackbird of the season. Between the bridge and Great Meadows Landing I saw and heard about 20 of them. I landed at Great Meadows in order to transload my deckload of trash into my ship's hold.
Once underway again, I began seeing wood ducks, common mergansers, mallards, Canada geese, and some ducks I don't usually encounter. By Ball's Hill I saw a pair of hooded mergansers and got a good look at them with my binoculars. Further downriver by Davis Hill, I saw a small group of about 10 common goldeneyes. Their identity was confirmed by the males odd mating display of jutting his head way back while lifting the front of his body upward and by the whistling sound their wings created as they took flight. This location became my turnaround point. 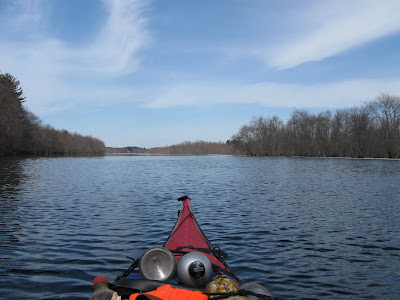 The trip back upriver was mostly into a warm breeze out of the southwest. I almost forgot how nice a breeze can feel. At the North Bridge a red-coated British soldier was on-hand for tourists to speak with and pose for pictures with. It was nice to see so many people enjoying the area.
By the time I arrived at my takeout location my deck was nicely decorated. 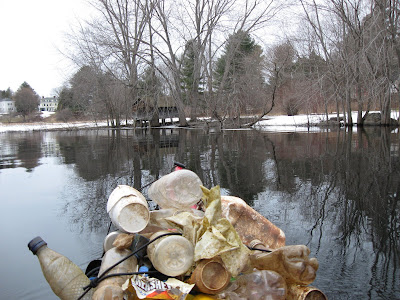 My trash count for the day was 66 pieces of trash of which 46 were recyclable. My YTD total is 158. Today's haul: 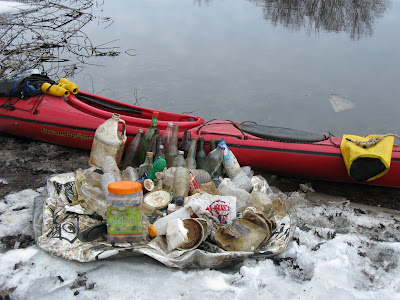 Glad to see you're back on the water - loved the faux fox head and golf club from a few posts ago. Amazing what you find out there. Lis